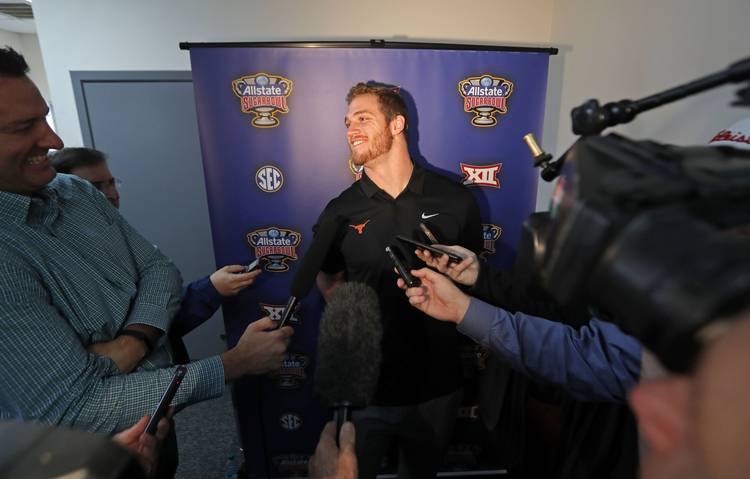 Holloman was among those impressed by a video of Beck that was tweeted out by the Sugar Bowl on Friday. In the clip, Beck is seen using sign language to communicate with a hearing-impaired family. Beck and Texas linebacker Anthony Wheeler, who joined three teammates and UT coach Tom Herman on a visit to a local hospital, also autographed Longhorn gear for the family.

As of Saturday afternoon, the original video had been viewed over a million times. Houston Texans star J.J. Watt and ESPN reporter Holly Rowe shared it on Twitter. (Beck doesn’t have a Twitter account but was told about Watt’s tweet by his mother, who was “more excited about that than anybody else.”) Holloman, who has five touchdown catches for Georgia this season, also expressed his respect for Beck on social media.

During a #SugarBowl hospital visit, @TexasLonghorns TE Andrew Beck realized that a patient and his family were all hearing impaired. He knew just what to say (and sign)…

Beck told reporters on Saturday that he had been tipped off by a nurse that a family he was about to visit was hearing impaired. Beck began signing as he entered the room and said the best part was seeing the surprise on the family’s face. Added Beck: “To be able to go in and be somebody that they can talk to that’s not related to them was really cool.”

Coaches met with the team and family members for pre-game meal. We were glad to have UT Longhorn 47 Andrew Beck join us to meet the team and wish them luck. pic.twitter.com/KUwlADEDt8

Beck took a couple of semesters of an American Sign Language class at Texas. He even served as a teacher’s assistant for professor Deborah White. Beck had used sign language in public settings before Friday, and he once had a postseason pep talk for the football team at Austin’s Texas School for the Deaf. A corporate communication major, Beck wants to still be involved with the hearing-impaired community in the future.

Read more: No longer on the move, Andrew Beck leading as both a captain and pass-catching tight end

A second-year captain, Beck entered this year as a known asset in UT’s run-blocking schemes. He has posted career highs in receptions (27) and receiving yards (276). Beck has caught at least one pass in all 13 of the Longhorns’ games.

After betting on himself, Texas native J.R. Reed makes an impact in Georgia’s secondary