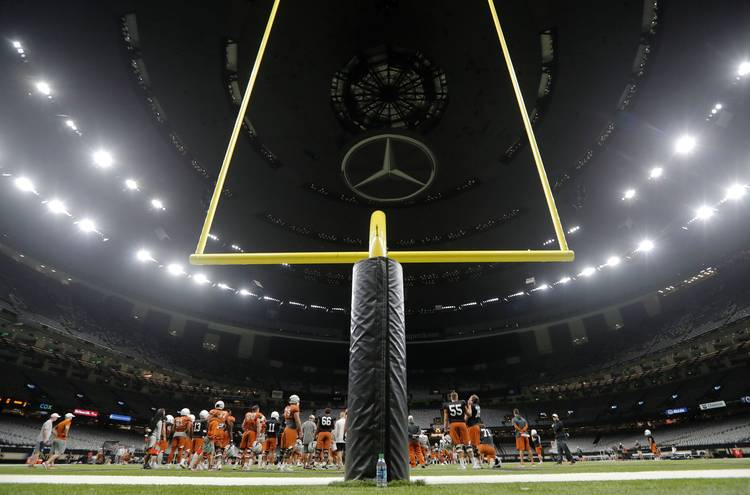 Texas practices inside the Superdome in New Orleans on Dec. 28, 2018. Texas will face Georgia in the Sugar Bowl on Jan. 1, 2019. (AP Photo/Gerald Herbert)

NEW ORLEANS — After two days under the bright lights, Texas moved its pre-Sugar Bowl practices to Tulane University on Sunday.

The Longhorns had practiced at the Superdome the past two days, but the stadium was unavailable on Sunday since the New Orleans Saints had a home game. During sessions with the media on Friday and Saturday, Texas players marveled about the time they spent in the Superdome. There was one minor problem, though. Since the Saints were set to host Carolina, the field was still configured for an NFL game.

Texas tight end Andrew Beck noted that lining up during the practices was a small challenge since the collegiate hash marks hadn’t yet been solidified. The Longhorns, though, have adjusted.

“At the end of the day, I feel like I’m familiar personally with an NFL field and how that correlates to a college field, so it didn’t really bother me,” Collin Johnson said. “The offense did a pretty good job of adjusting, but it’s definitely different.”

Said fellow receiver Lil’Jordan Humphrey, who attended Southlake Carroll in the Dallas area: “It’s been times where we had to play in NFL stadiums in high school and the hash marks were a little messed up. I kind of got a feel for it a while back. It didn’t bother me at all.”

The Sugar Bowl will mark UT’s fourth appearance in a professional stadium in a 15-game span. The Longhorns ended the 2017 season with a beating of Missouri in the Texas Bowl, which was held at NRG Stadium in Houston. This year, the Longhorns have lost at the homes of the Washington Redskins (34-29 to Maryland) and Dallas Cowboys (39-27 to Oklahoma).

This will be Texas’ first trip to the Superdome since a 49-0 rout of Tulane in 2002. Texas’ last postseason appearance at the stadium was the 1995 Sugar Bowl. Reserve defensive lineman Gerald Wilbon played in a high school championship game at the stadium in 2014. Beck told reporters that his Florida high school traveled to the Superdome during his junior year for an out-of-state showdown.

“It’s been dope,” Humphrey said. “The stadium’s cool. I’ve never been inside of it, so it was cool to just practice (there).”

Editor’s note: This article originally stated that Texas’ last game in the Superdome was played in 1995.