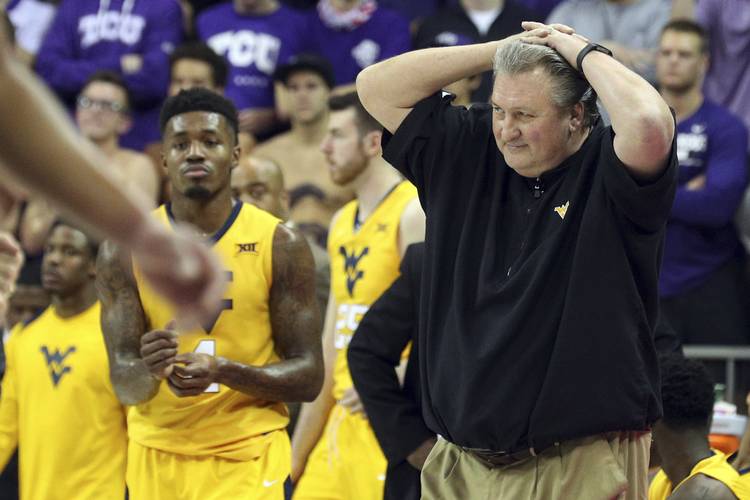 In this Monday, Jan. 22, 2018, file photo, West Virginia head coach Bob Huggins reacts during an NCAA college basketball game against TCU in Fort Worth, Texas. Over the past three weeks, West Virginia went from the nation's longest winning streak to its worst slump in four years. The Mountaineers have lost four of their last five games, including surrendering double-digit leads in the second half in losses to No. 10 Texas Tech, No. 7 Kansas and No. 21 Kentucky. (AP Photo/Richard W. Rodriguez, File)

About the series: Texas leads the all-time series 9-8. Last season, the Horns won 87-79 at home on March 3 in a game that shored up the team’s NCAA Tournament bid. Matt Coleman and Kerwin Roach II both had 22 points each.

About the Longhorns: Freshman Courtney Ramey had three straight double-digit scoring performances before getting only one bucket against Kansas State. Still, Ramey had three assists and continues to push upward, something coach Shaka Smart loves. “The thing that’s different about Courtney that’s different than really almost anyone else on our team is he has absolutely no fear,” Smart said. Matt Coleman III dove for loose balls and made smart plays against K-State. He had seven assists, Coleman’s highest total since the season opener. Jaxson Hayes is now shooting 75.4 percent after going 3-for-4 on Wednesday.

About the Mountaineers: Nobody inside Cooley Pavilion will be jumping for joy. But Texas played Kansas State without its best player (Dean Wade). Now, UT will face West Virginia without its best player. Sagaba Konate suffered a knee injury in December and was projected to be out 2-4 weeks. The Big 12’s best shot blocker, Konate is expected to return perhaps next week. Meanwhile, WVU lost its Big 12 opener against Texas Tech 62-59. Coach Bob Huggins’ club had 22 turnovers. “We are very charitable,” Huggins said afterward. “People struggle and we throw them the ball and make it easier for them.”