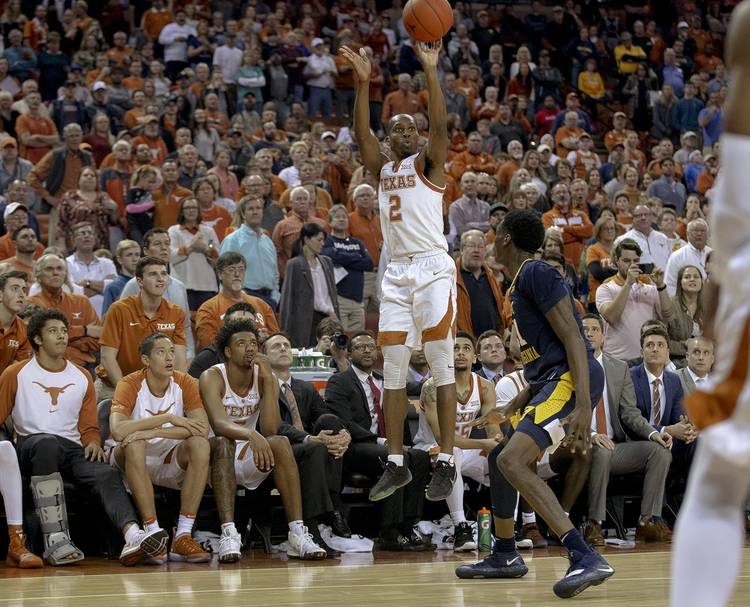 In a classic rock fight against West Virginia, Texas had slightly bigger stones.

Neither team shot well from 3-point range. Everybody took turns whacking away at the other and going to the free throw line. But it was a close game due to it being almost an even battle on the glass.

Still, Texas was the one celebrating a 61-54 victory at the Erwin Center after Matt Coleman III hit a clutch step-back 3-pointer with 1:03 remaining and the Horns closed it out with defense.

Dylan Osetkowski, having one of his best offensive performances in weeks, blocked a baseline shot attempt by Wesley Harris with 33 seconds left. Then, Coleman hit two free throws to ice it as Texas (10-4) moved to 2-0 in Big 12 play.

With all the attention being paid to the center position, Osetkowski has drifted along quietly under the radar. That changed Saturday night. WVU defenders sagged off Osetkowski, basically daring him to shoot. The senior from San Diego let it fly.

His left corner 3-pointer with 8:47 remaining gave Texas an eight-point cushion on a night when both teams ran hot-and-cold offensively. This was Osetkowski’s highest point total since putting up 14 against North Carolina on Thanksgiving. He finished with 14 points on 4-of-5 shooting and hit two shots from 3-point range.

The last few years, Texas has typically been one of the worst free-throw shooting teams in the Big 12, if not the worst. The Horns currently rank seventh in that category. No need to shoot off fireworks just yet, but free-throw shooting was critical on a night when both teams were in the bonus with about 10 minutes left. Texas finished the night 13-for-19 from the stripe.

Sophomore Jericho Sims walked out onto the floor an hour before tipoff wearing a protective boot on his right foot. A right ankle injury kept him out of the West Virginia game, and it could be an injury that sidelines him for several weeks, a source said. Coach Shaka Smart was expected to update reporters after the game.

Sims’ playing time had gone down recently, but his total absence would change Smart’s approach to Jaxson Hayes’ minutes. As of now, Hayes, Royce Hamm Jr. and Sims were all rotating at one of the forward spots. Smart went small against WVU, using a four-guard lineup with Hayes. Hamm played just two minutes in the first half.

West Virginia struggled early, yet somehow coach Bob Huggins’ team remained in the game. The Mountaineers were active on the glass and had an early 13-9 edge. When Texas went after rebounds, the Horns saw a corresponding rise in the score. Texas pulled even on the glass by halftime (13-13) and had a 32-26 lead.

“We’re talking about grabbing the ball, that’s a big one,” Smart said Friday. “If the ball’s there to go grab and you don’t grab it, you’ve got to come out.”

Oklahoma State was picked to finish 10th in the preseason, and the Cowboys are indeed struggling. Coach Mike Boynton’s club is 6-8 and ranks toward the bottom in most statistical categories. Texas hasn’t started 3-0 in conference play since the 2010-11 season when the Horns finished in second place. The next three are brutal — Texas Tech, at Kansas and Oklahoma.