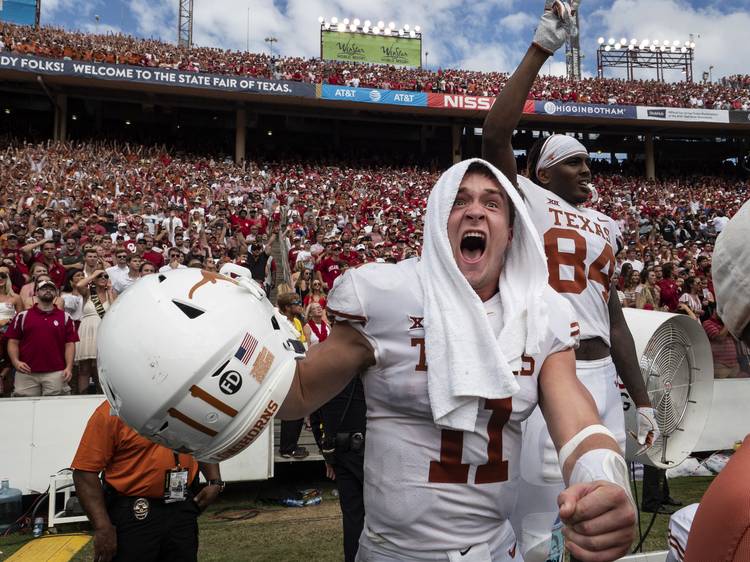 Texas quarterback Sam Ehlinger (11) and receiver Lil'Jordan Humphrey (84) celebrate as time runs out in a 48-45 win over Oklahoma at the Cotton Bowl in Dallas on Oct. 6. [Rodolfo Gonzalez for AMERICAN-STATESMAN]

By now, Texas fans are likely aware that the Longhorns ended the 2018 football season ranked ninth in the Associated Press’ poll.

The ranking was UT’s highest since it lost to Alabama in 2009’s championship game. Texas was one of 25 Football Bowl Subdivision-level teams to win 10 games this season, and the Longhorns made appearances in the Big 12’s championship game and the Sugar Bowl. How did Texas stack up statistically against the other 128 FBS programs, though?

What did Texas do really well in 2018? The Longhorns were 12-for-15 on fourth down, and that .800 batting average was only bested nationally by an Army team that was 31-for-36. Only three teams lost fewer turnovers than Texas, which gave away the football 11 times. Six Longhorns attempted a pass this season, and the team’s 65.1 completion percentage was envious for all but 20 of their contemporaries.

Quarterback Sam Ehlinger ranked seventh in points responsible for (248), and the sophomore’s 16 rushing touchdowns were the ninth-most on the FBS platform. With 1,176, Lil’Jordan Humphrey became the first Longhorn since Jordan Shipley in 2009 to earn a top-15 ranking in receiving yards. Safety Caden Sterns’ four interceptions were locked in a 39-way tie for 16th place on the national leaderboard.

What does UT need to work on in the offseason? Five teams were penalized more than Texas, which drew 41 of its 103 flags in its four losses. Texas and Central Michigan were also the only teams that did not have a 50-yard play this season.