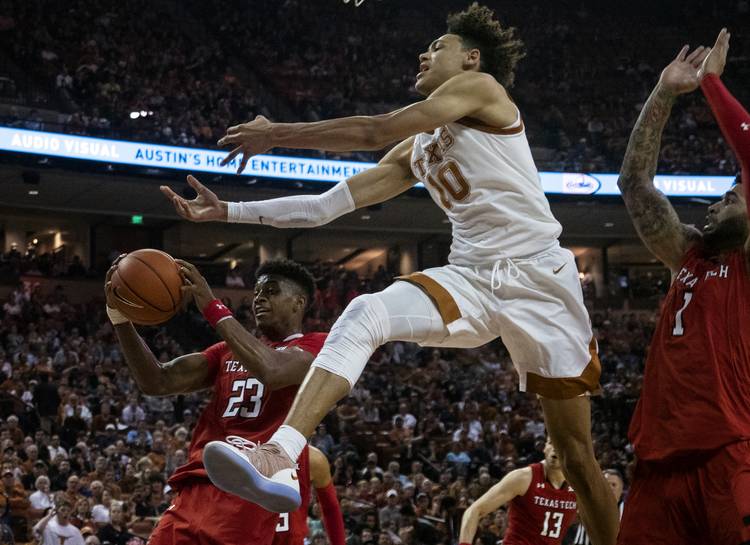 At crunch time, Texas simply couldn’t get enough buckets against No 8 Texas Tech.

The Red Raiders, known for having one of the nation’s best defensive squads, turned up the suffocating pressure and shut off the Longhorns down the stretch for a 68-62 victory at the Erwin Center.

Kerwin Roach II threw a lob pass to Jaxson Hayes for an alley-oop slam to tie things up 48-48. Then, Tech went on a flurry, getting buckets from Jarrett Culver, a 3-pointer from Davide Moretti and another score from Norense Odiase.

Texas (10-6, 2-2 Big 12) got within four when Matt Coleman II hit a jumper with 1:45 remaining. Coleman then forced a steal and started a run-out. But Jase Febres lost the ball inside, making for an easy Tech interception in the paint.

It was Tech’s first road win in this series since 1996. The visiting fans sure had a good time. Red Raiders fans were shouting “Raider Power!” with a volume rarely heard from visiting teams. It was easily the most raucous visiting crowd in Austin in years, topping the energy even Kansas fans bring.

For Texas, Roach had 17 points and Febres got hot early in the second half en route to 12 points. But it simply wasn’t enough against Tech (15-1, 4-0), the Big 12’s only unbeaten team left in league play.

It took a full-throttle effort for Chris Beard’s Red Raiders to do what Bob Knight, Pat Knight, Billy Gillispie, Chris Walker and Tubby Smith couldn’t — win in Austin. Tech had not won at the Erwin Center in 22 years, a streak dating back to 1996, which was the final year of the Southwest Conference. Matt Mooney had a season-high 22 points as the Red Raiders while three others finished in double figures. Tech shot 53.8 percent overall in the second half alone to put away the win.

Coach Shaka Smart wanted to see “level five juice” from his charges. They certainly had it midway through the first quarter. Texas had a 9-0 run capped by Jaxson Hayes’ dunk to take a 16-11 lead. Then, Hayes went to the other end and appeared to make a clean block on Tech’s Malik Ondigo, but officials called a foul. The Horns closed the half with a flurry, too. Coleman’s lob pass to Hayes and Febres’ layup capped a 9-3 spurt. Texas took a 30-26 lead at the break.

Any Longhorn who looked past Mooney had to be out of his mind. The senior guard caught fire just after halftime. He opened the second half with two 3-pointers and another layup after a run-out with Culver. That gave Tech a necessary shot of adrenaline. As if that wasn’t difficult enough, Elijah Mitrou-Long then fouled Moretti on a 3-point shot in the right corner. Swish. Moretti completed the four-point play, completing Tech’s 14-5 run and Texas was suddenly down five.

The Horns needed 10 minutes, 31 seconds to score 10 points on Tuesday in Stillwater. This time, they needed 10 minutes, 16 seconds. Roach’s 3-pointer with 9:44 remaining gave Texas a 12-11 lead as the home team opened 1-for-5 from 3-point range. Neither team shot well throughout the first half. Texas got points via dunks from Hayes and Coleman. Overall, UT was 12-for-30 shooting by halftime and 3-for-10 from 3-point range.

Texas makes its annual pilgrimage to Kansas on Monday for an appearance on ESPN’s “Big Monday.” The Longhorns last won at Allen Fieldhouse since 2011. Since that game, Texas is 1-14 in the series.