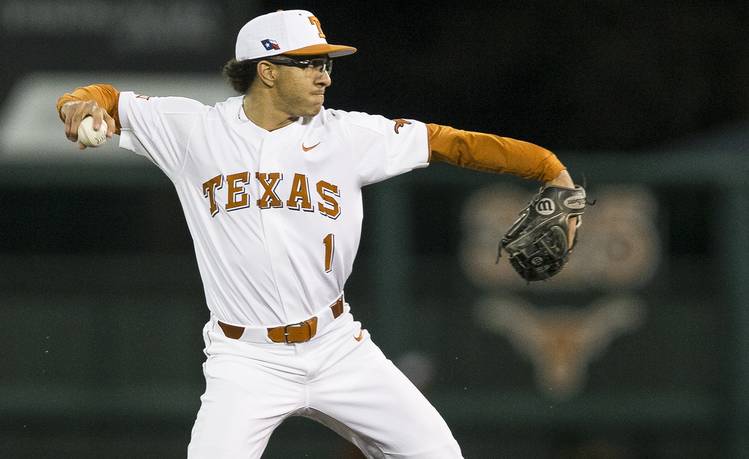 Texas infielder David Hamilton (1) throws to first base during a NCAA college baseball game against Lamar in Austin on Feb. 21, 2018. NICK WAGNER / AMERICAN-STATESMAN

Texas shortstop David Hamilton will miss the 2019 baseball season with an Achilles injury, the school confirmed on Saturday.

Hamilton had what the school called a “successful surgery to repair a ruptured Achilles” on Friday afternoon. OrangeBloods was the first to report on Hamilton’s injury.

A junior from nearby San Marcos, Hamilton has been UT’s starting shortstop since his freshman year. Hamilton has developed into a highlight-reel defender in the middle of UT’s infield, and he played a large role in the Longhorns turning a national-leading 73 double plays last season. Hamilton led Texas in 2018 with his 31 stolen bases, and one of his five home runs was a walk-off grand slam against Texas State.

Hamilton earned a second-team nod on the Big 12’s all-conference team in 2018.

Texas senior Masen Hibbeler is likely the top candidate to replace Hamilton at shortstop. Freshmen Bryce Reagan and Lance Ford are additional options if Texas decides to use the versatile Hibbeler elsewhere. Junior Ryan Reynolds, who has been the team’s third baseman this past two years, can also play the shortstop position.

Top pitching prospect flips his commitment from TCU to Texas