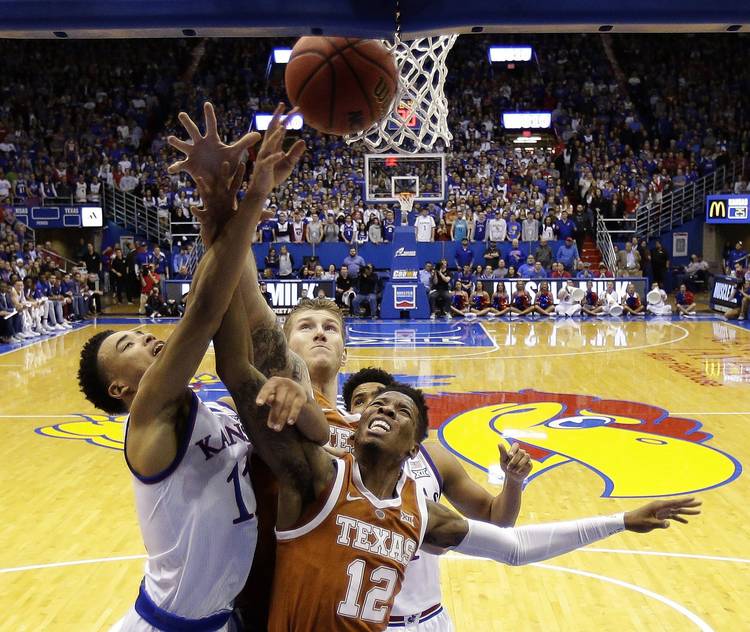 LAWRENCE, Kan. — Kansas coach Bill Self woke up this morning with a 26-0 home record whenever the Jayhawks play on ESPN’s “Big Monday.”

That streak looked like it was in serious jeopardy Monday against Texas.

Jase Febres went wild in the second half with three consecutive 3-pointers to tie things up. But he missed another desperation 3-pointer just before the clock expired, and Kansas held on for an 80-78 win at Allen Fieldhouse.

Matt Coleman III led the way for the Longhorns with a team-high 16 points while Kerwin Roach II added 13 more. Febres finished with 12 despite going 4-for-11 from 3-point range.

Courtney Ramey hit a 3-pointer with 9 seconds left to make it a one-point game. KU’s Marcus Garrett missed one of two free throws, and Texas called timeout with 8.6 seconds left. On the final play, Coleman tried to look for an opening before getting it to Febres, who had to force a tough jumper with a defender in his face.

Texas coach Shaka Smart needs more killers — players willing to do whatever it takes to win. That’s exactly what Coleman was against the Jayhawks. He showed no fear, whether it was getting in the lane for mid-range jumpers or driving the lane and throwing it up off the glass for buckets.

Also special credit goes to Febres, who got scorching hot late and tied it up with 2:26 left. The Horns were 0-for-8 from long range to start the second half. Then, Roach hit a 3-pointer, and Febres went wild to get Texas back into it.

The Longhorns should not traffic in the moral victory department, but this was a terrific effort. The Jayhawks were the better team. When Smart and his players pour over the video, they’ll see some huge missed opportunities. Defensive rebounds that went back to KU. A key shot-clock violation. A willingness to use finger-rolls underneath the basket when the correct play was a power move up for a dunk.

Roach had some strong defensive close-outs while guarding Lagerald Vick, but the KU senior still had a game-high 21 points. Sophomore Jericho Sims also gave the Horns some good energy minutes in his first real playing time since a right ankle injury.

The Horns steadied themselves, but fast forward to the start of the second half. KU again opened with two 3-pointers, one by Devon Dotson and another by Quentin Grimes. Leaky perimeter defense in this venue is always disastrous.

After falling behind 8-0, Texas steadied itself with Dylan Osetkowski’s dunk and a Coleman 3-pointer. Later in the half, Kansas’ Marcus Garrett scored 13 straight points by himself. But the Horns smartly mixed in dribble penetration with long-long-range shots and hung in there.

Texas finished the first half by hitting 8-of-19 shots from 3-point range and shooting 44.4 percent overall. Smart even coaxed another point out of the break when he yelled at officials, “The score’s wrong!” Officials changed a long jumper by Mitrou-Long to a 3-pointer after a review, giving Texas a 40-38 lead at the break.

Texas students don’t return to school until Jan. 22, so the Longhorns have the rest of this week to get ready for basketball’s version of the Red River Showdown. Oklahoma got off to another typically strong start under coach Lon Kruger and card a 13-3 record going into Wednesday’s game against Kansas State. The Texas-OU basketball game is typically one of the biggest home draws of the year.