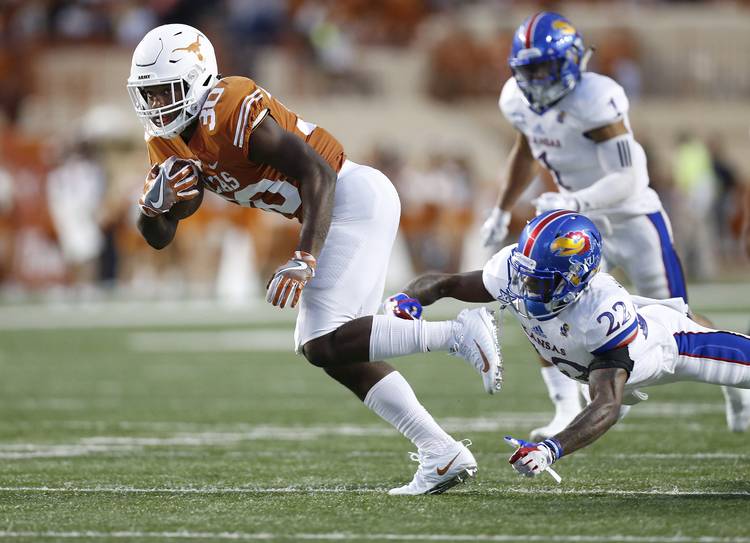 Next fall, Toneil Carter will be wearing a different shade of orange.

Carter announced on Tuesday that he will resume his football career at Sam Houston State. Carter spent the last two seasons at Texas, but he left the team in December. The Houston-raised running back will have three years of eligibility remaining.

I’m Offically a Bearkat 💯💪🏾
Thank you Bearkat family for accepting me . I promise I won’t disappoint .
Now into my bag I go🤐🤫

Carter was a four-star prospect when he signed with Texas in 2017 following a recruiting snafu at Georgia. As a freshman, he made two starts and rushed for 252 yards and three touchdowns on only 53 carries. The 5-11, 210-pound Carter also caught a key touchdown pass in UT’s 17-7 win at Iowa State.

Carter, though, was plagued by fumbling problems during his short stay in Austin. He was also suspended from UT’s appearance in the 2017 Texas Bowl. Buried on a crowded depth chart this season, he did not play in a single game.

At Sam Houston State, Carter will attempt to spark a Football Championship Subdivision-level rushing attack that just averaged 124.2 yards per game. Rising junior Kyran Jackson was the only Bearkat who topped 200 rushing yards in 2018. Carter will also join senior defensive lineman Erick Fowler, who transferred from Texas after the 2016 season, on Sam Houston State’s roster.