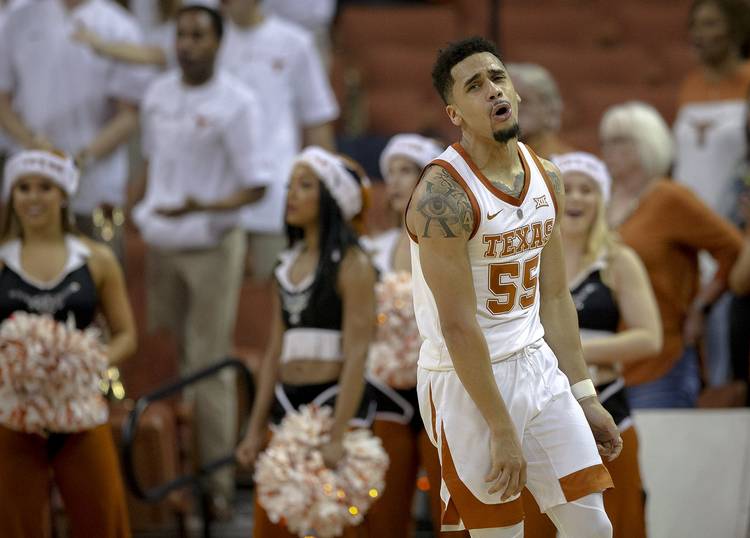 FORT WORTH — At some point, the Longhorns are going to learn never to look past anyone in the Big 12. To do so practically guarantees a loss.

Texas didn’t take Oklahoma State seriously and got pummeled in Stillwater. On Wednesday, it was TCU’s turn to sneak past a sleep-walking bunch of visitors in burnt orange.

The Horned Frogs ran up a 12-point lead in the second half and held off a furious charge at the end for a 65-61 victory at Schollmaier Arena.

UT’s Jaxson Hayes scored a quick layup with 23 seconds left to get the Horns (11-8, 3-4 Big 12) within three points. TCU’s Lat Mayen missed a one-and-one chance at the free throw line, and Texas called timeout with 12.3 seconds left while trailing by two.

This was almost the exact same situation Texas faced against Oklahoma State and Kansas. In both cases, last-gasp shots never found their mark.

TCU fouled twice, so draw the clock down to 6.6 seconds left. Then, UT’s Elijah Mitrou-Long threw up a wild, off-balance 3-pointer that hit the top of the backboard.

Kerwin Roach II finished with a team-high 15 points as Courtney Ramey and Jaxson Hayes both finished with 10. Texas was 9-for-26 from 3-point range.

Texas coach Shaka Smart said Ramey, a freshman, wants to go so hard and play so well that it can be detrimental. Smart says Ramey can “sometimes cross over that line to the point where he’s psyched himself out a little bit.”

After a lackluster game Saturday in his first start against Oklahoma, Ramey bounced back and was all-effort, all-the-time against TCU. Ramey had seven points, four assists and three steals before halftime.

TCU started to pull away with a 9-0 run midway through the second half. Texas needed a wake-up call. Then, Dylan Osetkowski had a vicious two-handed dunk. On the next possession, Osetkowski followed a miss with another dunk. Mitrou-Long then did a stutter step at the top of the key and practically juked Kouat Noi clear out of town. Mitrou-Long buried the 3-pointer, and the Horns were back in the game with 11:18 left.

Matt Coleman’s mind must’ve been elsewhere. He had three turnovers in the first half doing things that were un-Coleman-like. He got too casual getting the ball to Hayes, and TCU’s Alex Robinson nearly came up with an easy steal. That said, he still dished out three assists in the first half and had one 3-pointer. But it wasn’t his best 20 minutes.

TCU earned every bit of its 35-31 halftime lead. The Frogs were relentless on the offensive glass and piled up 10 second-chance points. Noi nearly brought the roof down with a put-back slam just before halftime when none of the visitors blocked him out. TCU had an 8-2 edge on the offensive glass in the first half. Making matters worse, the Horns had 10 turnovers on the other end, like Kerwin Roach’s missed lob to Hayes, Jericho Sims somehow losing the ball after getting a steal and other mishaps.

Whoever is scheduling all the Big 12/SEC Challenge matchups must be new. Texas played at Georgia two years ago on Jan. 28, 2017, and lost by two. On Saturday, the Longhorns are headed back to Athens for another made-for-TV clash against the Bulldogs. The game was scheduled long before the two teams played in the Sugar Bowl on Jan. 1, though.

No, Bevo XV will not make this trip, so Uga can breathe easy.