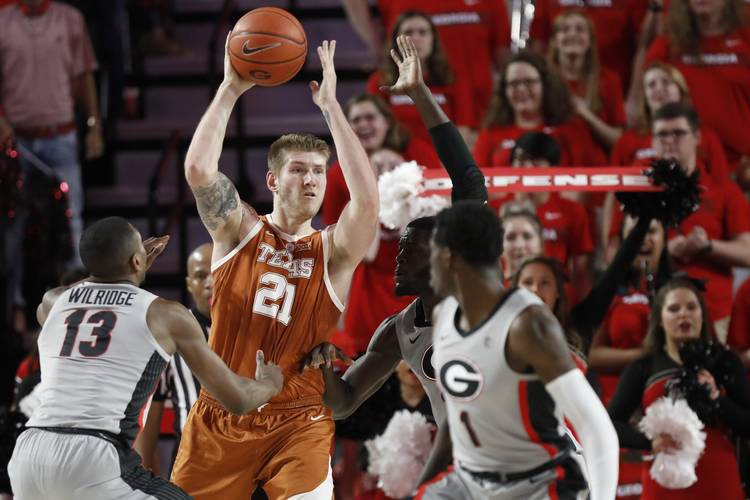 The Bulldogs hit 12 3-pointers, their highest total in three seasons, and had a rather easy time down the stretch of a 98-88 victory over the Longhorns at Stegeman Coliseum.

Texas players had the look of resignation and slumped shoulders with more than 10 minutes left. They simply couldn’t stop Tyree Crump and the Bulldogs’ overall onslaught in the Big 12/SEC Challenge.

Texas seniors Kerwin Roach II (16 points) and Dylan Osetkowski (15 points, career-high seven steals) carried most of the scoring load. Freshman Courtney Ramey had one of his best days of the year getting 19 points of 7-of-14 shooting. Offensively, Texas held its own by shooting almost 50 percent. But the defense was awful.

Georgia was shooting 66 percent with three minutes left and leading by 10. The Bulldogs rank 11th in the SEC in scoring. But their point total was the most Texas has yielded to a non-conference opponent in coach Shaka Smart’s four seasons. In fact, Georgia’s 98 points ties for the most allowed by any team under Smart.

Texas was so sloppy that Georgia had 26 turnovers and still almost scored 100 points.

Crump’s once hit six 3-pointers in an exhibition game, but he’d never hit more than five in an actual game for the Bulldogs. He set a new career high against Texas and looked every bit like the smooth shooter coach Tom Crean hoped he’d be.

At least Osetkowski showed some stomach for the fight. At the under-16 minute timeout in the second half, Osetkowski came to the bench and just unloaded on his teammates. The senior was yelling at virtually everyone. As the second half unfolded, Osetkowski got the ball on what looked like clear-out plays for him to sink or swim. He got stuffed by the rim on a dunk but kept driving. He was 4-for-11 shooting but had six rebounds and got his hands in passing lanes for deflections.

It’s well established at this point that Texas’ perimeter defense is rather leaky. But Coleman made things worse by being overly aggressive. He closed out Crump a little hard and fouled the Georgia junior on a made 3-pointer with 11:51 left in the first half.

Three possessions later, Coleman did the exact same thing again. Coleman slammed into Crump like a 1,700-pound steer trying to bust through a steel barricade. Once again, Crump’s 3-pointer splashed through the nets as Georgia took a 24-23 lead.

Georgia had one of the most blistering hot streaks imaginable in the first half. The Bulldogs made 10 consecutive shots, which included hitting seven of 10 3-point shots in the first 12 minutes. The Bulldogs had a 16-2 run during that stretch and took a 32-25 lead. But Texas was just as hot, albeit just not scorching. The Horns hung in there by going 5-for-6 from 3-point range and shooting 62.5 percent through the first 12 minutes.

The Horns were kicking themselves after two-point loss at Allen Fieldhouse on Jan. 14. They don’t have to wait long for a rematch. Kansas makes it annual pilgrimage to the Erwin Center at 6 p.m. Tuesday. The Horns have not beaten the Jayhawks since a 2014 matchup in Austin. Coach Bill Self’s team has won 10 straight in the series.