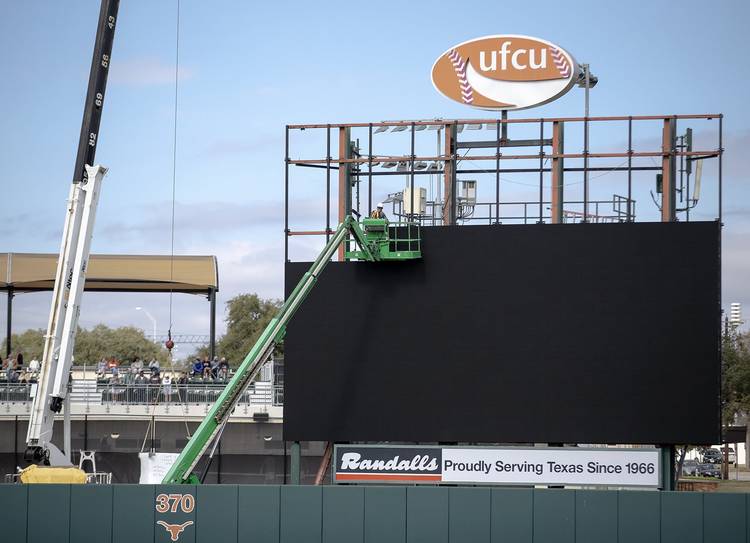 A construction crew installs a new video board at UFCU Disch-Falk Field during the first baseball practice of the season on Jan. 25, 2019 in Austin, Texas. [NICK WAGNER/AMERICAN-STATESMAN]

Texas played 40 baseball games at UFCU Disch-Falk Field in 2018. Those who frequently cheered on the Longhorns, however, may notice a few changes when this upcoming season gets underway.

While meeting with the media ahead of UT’s first practice on Friday, head coach David Pierce provided updates about some of the ongoing renovations at UFCU Disch-Falk Field. As Pierce spoke, workers were busy replacing the outfield scoreboard with a new video board. Pierce also said that some work had been done to the home team’s bullpen and an indoor wall that honors the team’s alumni.

A bust of former coach Augie Garrido will be unveiled outside the stadium ahead of the annual alumni game on Feb. 2. Garrido passed away last March at the age of 79. He led Texas to two national championships and was college baseball’s all-time winningest coach until this past season.

Not all of the projects at UFCU Disch-Falk Field will be finished by the time UT hosts Purdue for its home opener on Feb. 22. In fact, the team’s indoor facility will be under construction throughout the 2019 season.

The facility, which will be located beyond the first-base stands, was originally set to open this spring. Pierce, though, said the construction started later than expected. According to UT’s third-year coach, the facility should be ready by the fall. UT is currently the only Big 12 baseball program without an indoor training area, but the donor-funded J. Dan Brown Family Player Development Center will change that.