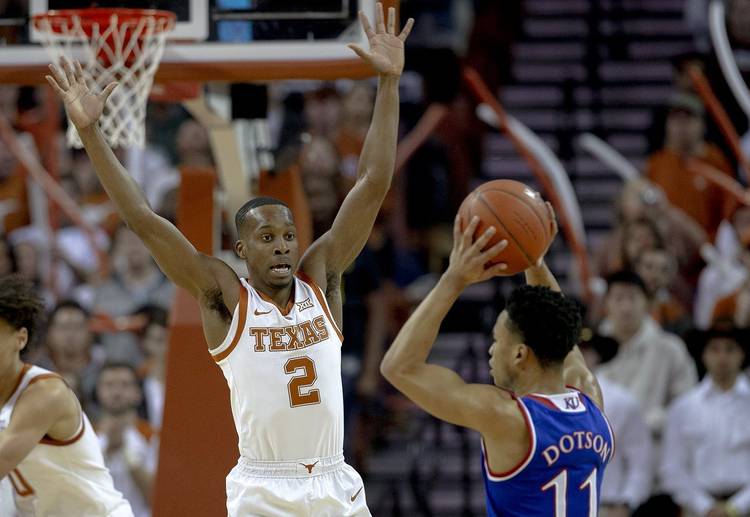 A double-digit victory over the reigning 14-time Big 12 champions is as good as its gets.

In what felt like a must-win situation, Texas battled its way to a 73-63 victory over No. 11 Kansas at the Erwin Center and snapped a 10-game losing streak in the series. It was UT coach Shaka Smart’s first win over Kansas since coming to Austin. He was previously 0-7.

Texas fans can exhale. The Longhorns (12-9, 4-4 Big 12) had lost five of their last six games and were in danger of falling into an even deeper funk.

Kansas (16-5, 5-3) looked nothing like what fans have come to expect from coach Bill Self’s club. It looked like a team still wobbly after a weekend loss to Kentucky. But the Jayhawks were only down four with 1:52 left.

The Jayhawks tried to trap UT’s Matt Coleman III just across the half-court line, but he found Jase Febres in the corner. Febres buried a 3-pointer and the crowd went wild. Then, Jaxson Hayes was able to slam home a dunk that gave the Horns a 65-58 lead with 1:16 left.

Texas senior Kerwin Roach II hit six consecutive free throws in the final 31.7 seconds to close it out. Texas shot 54.5 percent in the second half and rang up 47 points after the break.

Senior Dylan Osetkowski said this Texas team was at a crossroads after last Saturday’s loss to Georgia. The senior wasn’t going home with any regrets on Tuesday. He got the ball, established his position and went to work. The jumper over Mitch Lightfoot was nice. But the post up and fight showed in a bucket over David McCormack was terrific. That gave Texas a 39-30 lead. He finished with a team-high 16 points and went 6-for-6 from the free-throw line.

In the first matchup in Lawrence on Jan. 14, Kansas came out and threw haymakers to start both halves. Texas was ready this time with suffocating defense. Osetkowski was in the right place at the right time for two putbacks. Kerwin Roach II and Courtney Ramey both hit 3-pointers as Texas took an early 17-8 lead. It took Kansas 9 minutes, 52 seconds to score 10 points.

The second half brought more of the same. Texas opened with 3-pointers from Ramey, a terrific turnaround off the low block by Jaxson Hayes and a Osetkowski jumper. Texas had a 35-27 lead with 16:23 remaining.

Hard to nitpick anything about this one. The only time Kansas really looked like Kansas was the final four minutes of the first half. With Texas leading 23-12, Marcus Garrett scored on a putback to light the visitors. Ochai Ogbaji hit a 3-pointer from the right wing and then threw down a dunk to cap an 11-1 run. But aside from that spurt, the Jayhawks couldn’t really get much going in consecutive fashion.

Texas’ defense early was terrific. Hayes had two blocks, Ramey had a steal and the defense forced three shot-clock violations early. It was an incredible effort compared to what happened last Saturday in Georgia when UT allowed 98 points. KU’s Dedric Lawson was held scoreless in the first half, and Garrett had just two points. They combined for 37 points the first time around.

KU had six turnovers in the first 12 minutes. The Jayhawks had only four turnovers the entire game the first time they played the Horns.

Iowa is one of the states currently swamped by the “Polar vortex,” a ferocious winter storm that dropped wind chills into the minus-30 degree territory. The Longhorns should dodge that chaos on Saturday in Ames, Iowa, but they can’t dodge the Iowa State Cyclones. Smart has done well against Iowa State, going 5-2 in the series over the last three years. Just pack plenty of warm clothes.