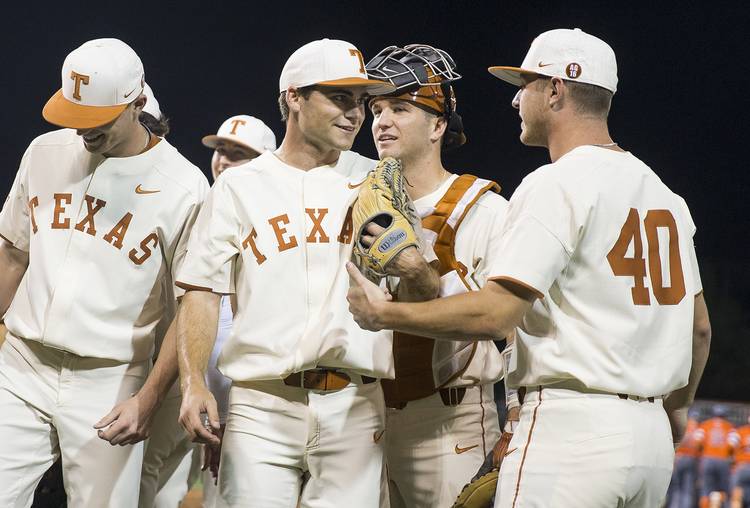 Two years ago, Kacy Clemens started at first base in 62 of the 63 games on the UT baseball team’s schedule. He likely would have been 63-for-63 had he not served a one-game suspension following an ejection against rival Oklahoma.

Clemens was drafted by the Toronto Blue Jays after the 2017 season, and the starting line-up at Texas missed his consistent presence. Last year, first base turned into one of the most-manned positions on the 40 Acres. Over Texas’ 65 games, six Longhorns got playing time at the position.

“It’s one of those positions that you used to never worry about,” Texas coach David Pierce said. “It seems like every year now, it’s like, who’s going to play first?”

Before moving back to third base, Ryan Reynolds started the season as UT’s first baseman. Catcher DJ Petrinsky and outfielder Masen Hibbeler combined for 15 starts at first base but were better fits elsewhere. Sam Bertelson started three times at first base during his freshman year. Zach Zubia, the power-hitting designated hitter and all-conference honoree, had one defensive put-out.

Texas eventually decided that Jake McKenzie was the best option at first base. A seasoned utility player, McKenzie contributed a .998 fielding percentage and was tied to 46 of UT’s NCAA-leading 73 double plays. McKenzie only hit .252 with no home runs, but he improved enough offensively that he was batting in the line-up’s sixth slot by the College World Series.

McKenzie has graduated, so there is once again a hole at first base. When asked about the position last week, Pierce joked that “it’s like we’ve got eight guys over there every single day, every single year.” Texas will likely just play the first baseman who is hitting the best, and Bertelson and redshirt senior Michael McCann are currently the front-runners.

When speaking about Bertelson, who bats left-handed, Pierce said that “If Sam hits, he’s the best guy.” McCann is a respected leader in the clubhouse who Pierce believes has earned a chance to play regularly. McCann has hit .261 in his collegiate career, while Bertelson has only 13 at-bats to his credit.

McCann is a catcher by trade, so Petrinsky could find some playing time at first base when McCann relieves him behind the plate. Zubia, who hit 11 home runs last year as a redshirt freshman, and freshman Peter Geib were also mentioned by Pierce as options.

Texas will open its 2019 season at the University of Louisiana at Lafayette on Feb. 15. The first four contests on UT’s schedule are road games. The Longhorns have scheduled their annual alumni game for this Saturday.