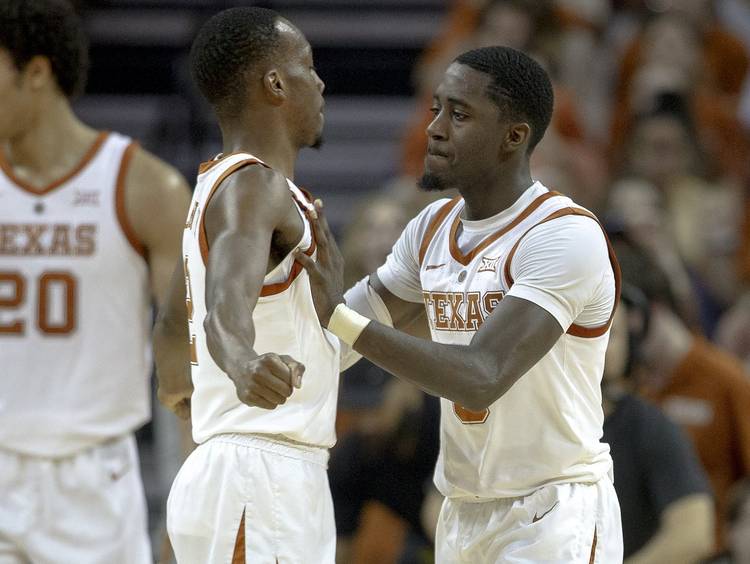 Texas knocked that streak-free shine off Baylor with a 84-72 victory on Wednesday at the Erwin Center.

The Bears came in riding a six-game winning streak to hold a spot atop the Big 12 standings. That’s now gone. So is the team’s six-game series winning streak over the Longhorns.

Senior Kerwin Roach II had a team-high 21 points on 7-for-9 shooting. Matt Coleman III had 14 points, Jaxson Hayes rang up 12 and Courtney Ramey added 10. Jase Febres drilled three treys from beyond the arc, and even Jericho Sims got going late with some big layups.

Texas currently leads the league in free-throw percentage in Big 12 games. But the Horns missed three straight one-and-one opportunities down the stretch as the Bears committed three turnovers in five possessions. Still, the Horns finished 22-for-34 from the line and shot 55 percent overall.

Last weekend at Iowa State, Coleman felt he was starting to get his swagger back. It showed all night long against the Bears. The Texas point guard directed traffic, spread the ball around and helped bottle up Baylor’s Makai Mason. In the second half, Coleman lost the ball off his foot for a turnover. But he went to the other end, got on the floor and helped force a Baylor turnover. In addition to his points, Coleman had six rebounds and five assists in 38 minutes.

Sometimes you wonder how various players will respond when challenged directly. Baylor’s Mario Kegler went right at UT’s 6-foot-11 Hayes in the second half and posterized the freshman with a nasty dunk. To Hayes’ credit, he went to the other end and got a vicious dunk himself. Then, Hayes sprinted back and blocked King McClure’s shot. It was a good back-and-forth moment for Hayes, who showed no signs of moping or falling behind after the initial Kegler slam.

The game plan was clear. Get inside the arc, get to the paint and force the action inside. That worked to perfection in the first half as the Horns ran up a 15-point lead and shot 61 percent before halftime. But Baylor started heating up in the second half, and Texas got lulled into a 3-point shooting contest.

Sure, Febres hit two from the same spot on the right side, but Smart has been all over his charges to stay focused on paint touches. The next two possessions, Roach got inside for an 8-foot jumper in the lane and Coleman slipped the ball to Sims for a left-handed layup on a run-out.

Baylor coach Scott Drew looked exasperated midway through the first half about the foul disparity and some questionable 50-50 calls that went UT’s way. Finally, he lost it. Drew got called for a technical foul with 4:17 left before halftime when the Bears had 11 fouls compared to the Longhorns’ four. Ramey pleaded with Smart to shoot the free throws. He missed both.

Texas makes the longest road trip of the season this weekend with a 7 p.m. Saturday trip to West Virginia. Coach Bob Huggins’ club has struggled all season long without star center Sagaba Konate (knee). The Mountaineers (10-13, 2-8 Big 12) are currently in last place in the league standings. That said, West Virginia has beaten Kansas and Oklahoma.

As he decides his future, Shane Buechele opts to stay away from Texas’ football team