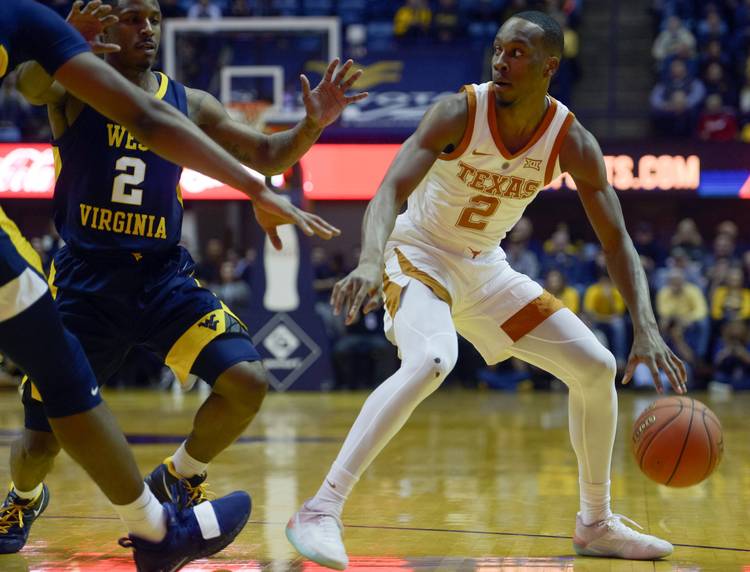 Kerwin Roach II opened the second half with a thunderous two-handed dunk. Courtney Ramey followed that with one of his five 3-pointers. Roach later found Ramey for a holy-smokes, did-you-see-that, one-handed dunk and the blowout was on.

Jaxson Hayes was busy dunking on so many players in the second half, WVU fans just quietly got up and bolted with eight minutes left. Even walk-on Blake Nevins got in the scorebook. “I’ve seen enough,” one Mountaineers fan yelled out to those sitting on press row.

The Longhorns steam-rolled their way to a 75-53 victory over the last-place Mountaineers on a chilly night in West Virginia. It was UT’s biggest conference win in coach Shaka Smart’s four seasons.

When Jase Febres buried a 3-pointer with 13:47 left, WVU coach Bob Huggins called timeout as Texas polished off a 17-4 run. The Horns scored nine straight after that and ran up a 25-point lead.

Ramey continues to evolve into a solid college basketball player. He scored 12 of his season-high 19 points in the second half against Georgia on Jan. 26. But you can make the case the first half was his best 20 minutes of the season. Ramey had 11 points on three 3-pointers, including one shot from the banks of the local Monongahela River. He also had three assists, no turnovers and no fouls in a period where everybody was getting whistled for this or the other. He tied his season high with 19 points overall.

Jaxson Hayes went to the bench with 17:26 left in the first half. In came Jericho Sims. Two plays later in the half showed that his confidence is coming back. Sims caught a hot pass under the basket, composed himself and went up strong for a layup and foul. The next possession, Sims went up in the air and caught a lob pass from Ramey for dunk.

The West Virginia students took that literally by unveiling a glow-in-the-dark version of the Horns Down with foam fingers. They should have been taunting the home team. WVU is in last place for a reason this season. Without injured shot-blocker extraordinaire Sagaba Konate, coach Bob Huggins is forced to piecemeal this thing with younger players. WVU is now 0-10 in games it was trailing at halftime and 0-10 in games where it fell behind by double digits.

Nobody comes to a Saturday night game to see the officials. But almost everyone on the floor was getting whistled for various things in the first half. There were nine fouls called in the first six minutes. WVU went into the bonus with 11:16 left in the first half. Texas crossed into that territory with eight minutes left before the break.

At halftime, there were 21 made baskets and 20 fouls called combined. The two teams combined to hit 11-of-18 shots from the free-throw stripe in the period thereby ruining the back-and-forth flow.

Getting a victory was critical as Texas now has two home games upcoming against Big 12 leader Kansas State (Tuesday) and Oklahoma State (Saturday). This was UT’s first back-to-back wins since a three-game winning streak that started Dec. 28. After that, the Longhorns will close out the regular season playing three of the last five on the road.