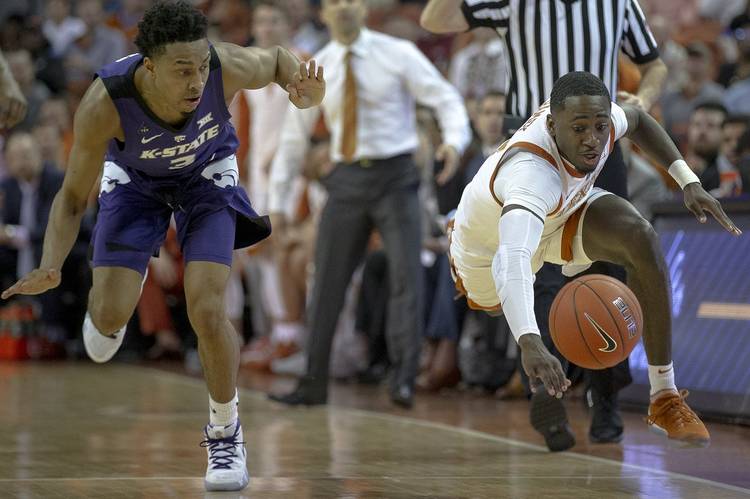 The Minister of Culture is now 1-1.

Texas super fan Matthew McConaughey broke out the burnt-orange suit again for Tuesday’s game against 18th-ranked Kansas State but it lacked the same magic it had against Oklahoma. Blame the dry cleaners.

The Wildcats practically shot the lights out of the Erwin Center in the second half and held on for a 71-64 victory over the Longhorns.

K-State (19-5, 9-2 Big 12) started the second half by hitting nine of its first 11 shots. Coach Bruce Weber’s club cooled off but not by much. They finished the half hitting 57 percent after halftime and 55 percent for the game.

Texas (14-11, 6-6) trailed by only four with 1:26 remaining. But UT’s Jase Febres missed a corner 3-pointer, and the Wildcats got two more free throws. Then, Courtney Ramey missed another 3-pointer with 25 seconds left, and fans started headed for the exits.

This was a terrific game throughout with excellent play on both sides. Kerwin Roach II led the way for the Horns with 17 points, and Ramey added 10. Barry Brown and Xavier Sneed both had 16 points each for the Wildcats.

If any Texas fans missed Ramey’s performance last Saturday against West Virginia, he put on a better show against K-State. The freshman hustled all over the place and showed why he’s going to be a cornerstone piece for the future. He finished with 10 points, six rebounds and one assist. At one point, it was killing Ramey to be on the sideline. After one call went against Texas, Ramey was pounding his fists on his head in frustration. Coach Shaka Smart did sit Ramey down in the second half after he was 0-for-1 in 11 minutes after halftime, though.

Winning basketball sometimes doesn’t show up in the final stats. Like how about the time Ramey slipped underneath the basket and got a fingertip on a loose ball, pushing it to Roach? Or that time when Febres battled through traffic for a must-get loose ball late in the first half. And some things do. Dylan Osetkowski had his hands in the passing lane and snagged a steal that led to a run-out and Roach layup.

And there was this…

The Wildcats were without the injured Cartier Diarra. But this was still the same group that reached the Elite Eight last season. It showed just after halftime when K-State put together an impressive 10-2 run. Dean Wade threw down a dunk, and Sneed followed with an open 3-pointer. Ramey threw the ball away on an inbound pass via a miscommunication. K-State went the other way, and Makol Mawien threw it down from a slip pass from Sneed. Timeout Texas.

The Horns didn’t let a few early turnovers knock them off stride. Coleman lost the ball out of bounds, and Osetkowski slipped after getting into the paint. The offense simply its focus. Ramey had a fast-break dunk, and then he found Sims for an easy dunk. Roach made a silky smooth move at the free-throw line, broke Mawien’s ankles and drove for a layup.

Texas made 11 of its first 16 shots, for a staggering 69 percent. And the most impressive thing? There were only two 3-point shots in that entire stretch, which took the first 12 minutes. The Horns finished the first half shooting 56 percent by going 15-for-27 overall. They were 2-for-8 from long range in the first half.

Texas will want to extract some revenge over Oklahoma State at noon Saturday. The Horns had a three-game winning streak going early in Big 12 play and then showed up flat and uninspired in Stillwater. OSU had a relatively easy time in a 61-58 win even though Ramey had a chance at a game-tying shot at the buzzer. The Cowboys have lost six of their last seven games going into play Wednesday.

Bohls: Why did one guru think Charles Omenihu could drop to the 4th round in the NFL draft?