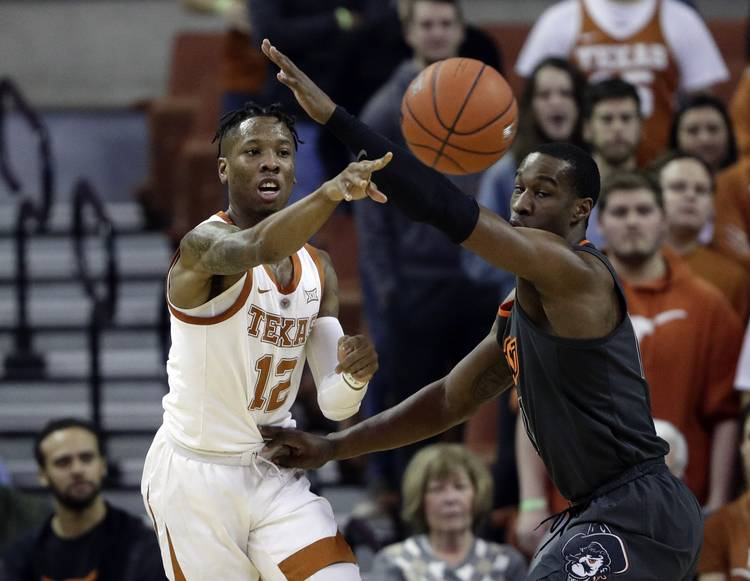 Oklahoma State’s Thomas Dziagwa has this funny little move where he mockingly fires an arrow into the sky after every made 3-pointer.

Dziagwa’s quiver was practically empty after unloading on Texas. The junior hit a career-high seven 3-pointers, but it still wasn’t enough for the Cowboys.

Texas was content to grind it out inside while Oklahoma State bombed away, and it was the Longhorns that came away with a 69-57 victory on Saturday at the Erwin Center.

Kerwin Roach II had a big day with 16 points, as did Dylan Osetkowski (14 points). The Horns got steady contributions across the board and went 16-for-18 at the free throw line in a game that would’ve been damaging to their postseason hopes had things gone off kilter.

Roach hasn’t had many highlight-worthy dunks here in the last few weeks. He finally got one late in the first half by snagging a turnover and going the other way for a two-handed flush. Roach, a senior who still hasn’t won an NCAA game yet, needs to be this team’s offensive spark the rest of the season.

Special tip-of-the-cap to reserve Royce Hamm Jr. The sophomore continues to make things happen on the random nights he gets to play. He had a block that led to an Oklahoma State shot-clock turnover. Then, Hamm missed a layup, battled for the rebound and went up for a grown-man layup that gave Texas a 63-51 lead.

Multiple Longhorns were getting floor burns on Saturday, and that’s a good thing. Eli Mitrou-Long, Jase Febres and Jaxson Hayes all went diving after loose balls, something coach Shaka Smart has been practically begging for.

There were some oddball moments, too, like when Courtney Ramey fired a pass to the open man, which happened to be Smart standing on the sideline. But overall, Texas had far more aggression Saturday than in the first game against OSU. Pride has a funny way of influencing that.

Texas has been relatively fortunate this season on the injury front. Jericho Sims conceded Friday that his sprained ankle injury suffered during non-conference play was worse than initially known. Otherwise, it’s been smooth sailing.

Horns Down in this case goes to the bad luck Kamaka Hepa experienced in Friday’s practice when he caught an elbow and needed a few stitches. Hepa was unavailable against the Cowboys, although he was honored in pre-game for participating with Team USA last summer.

On each possession, Smart stresses the importance of getting three “paint touches.” In theory, the ball, or ball-handler, must get in the paint that many times on each trip down the floor. When the Horns do that, it leads to a much higher-percentage shot. Take the first half, for example. Texas was 9-for-14 on 2-point shots while going 5-for-14 from 3-point range. It was a big reason why UT was up 38-27 at halftime.

Texas finally gets its bye in Big 12 play next week and will return to action next Saturday at Oklahoma. There are five games left in the regular season.

Texas baseball team wins another close one against Louisiana-Lafayette