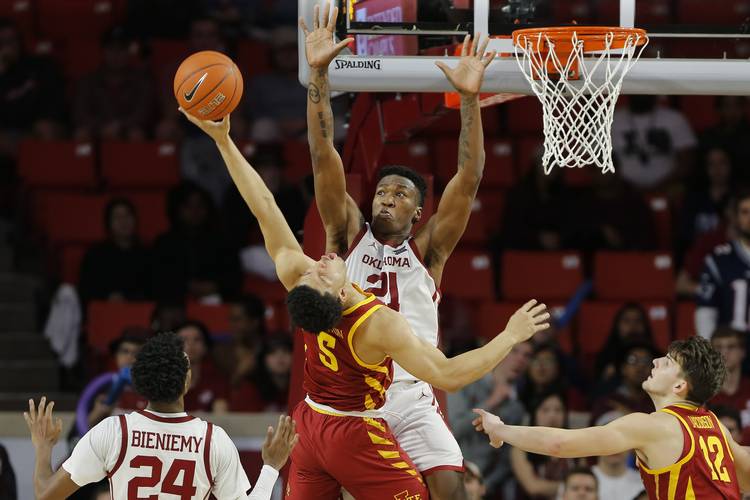 About the series: Oklahoma leads the all-time series 54-40. The Longhorns currently have a leg up in this series, having won five of the last six games. Texas is aiming for its second regular-season sweep since 2011 and 2012.

About the Longhorns: Sophomore Royce Hamm Jr. hasn’t played much during the Big 12 portion of the season. But when does get activated, Hamm tries to make something happen, like he did last week against Oklahoma State. Hamm had one block, missed a jumper, fought for the rebound, regained his position and scored a tough layup that energized his teammates. He’s come to accept his role behind Jaxson Hays and Jericho Sims. “When I get on the court, I try to let all my problems or all my personal experiences or anything that happened to me, just let that go,” Hamm said. “When I step on the floor, I have something I’ve got to do.” Coach Shaka Smart said Kamaka Hepa, who missed the OSU game with a concussion, will likely not play against OU.

About the Sooners: Coach Lon Kruger’s club snapped a five-game losing skid with an impressive 71-62 road win at TCU. Kristian Doolittle had 21 points, 10 rebounds and, as Kruger told reporters, “Pretty much did everything you’d want a guy to do.” OU would need to get on a late-season run to get back into NCAA Tournament contention. But the Sooners may be out of karma after the sizzling runs fueled by Buddy Hield and Trae Young. This year’s team has struggled to score (71.2 points) and shoot (44.1 percent). It’s a middle-of-the-pack Big 12 team this season, but playing in Norman still isn’t easy. “The goal is just to get better every day as a team and just come together long term and try and get hot,” OU’s Christian James told reporters after the TCU win.