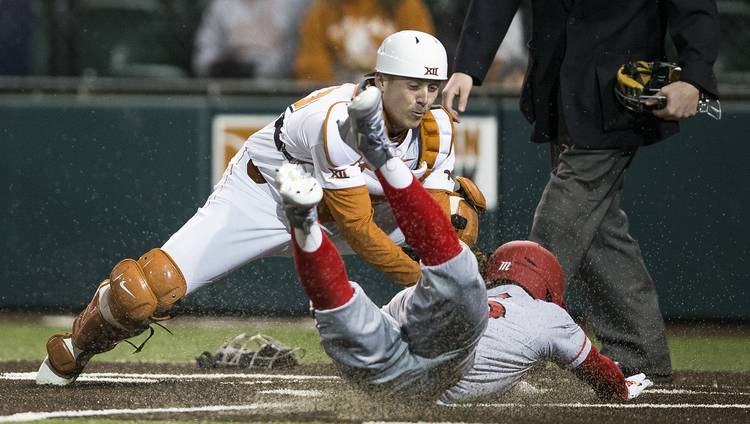 One season after it went 32-8 at UFCU Disch-Falk Field, Texas upended Purdue in its home opener on Friday night.

Four Purdue pitchers issued 10 walks, three of which loaded the bases in the first inning. Ryan Reynolds took advantage of that opportunity with a two-run single. Purdue cut UT’s 2-0 lead in half in the fourth frame, but the Longhorns distanced themselves by scoring five times over the next three innings.

Texas sophomore pitcher Bryce Elder earned the win on Friday. Named the Big 12’s pitcher of the week on Monday, Elder allowed six hits, three walks and one unearned run over his six-inning start. The Boilermakers struck out six times against Elder, who now boasts a 0.64 ERA over 14 innings.

With the win, the No. 23 Longhorns improved to 4-1. Purdue (0-4) is still searching for this season’s first victory.

MCCANNON! @mikewmccann3 erases another baserunner for the first out for the 4th! #HookEm

In addition to a RBI single, Michael McCann contributed five defensive assists from the catcher position. He threw out two of the three Boilermakers who tried to steal a base. With DJ Petrinsky (shoulder) still limited, UT expects to start McCann in the first game of Saturday’s double-header before debuting freshman Caston Peter in the follow-up contest.

NOTABLE NUMBER: 153. The Longhorns are now 153-67 against the 13 Big Ten teams that currently have a baseball team. Texas owns a winning record against 10 of those schools. UT has gone .500 against Nebraska (31-31) and Rutgers (1-1). It has never played Michigan State. In 1967, Texas posted a 7-0 win in its only meeting with a Wisconsin program that ceased operations after the 1991 season.