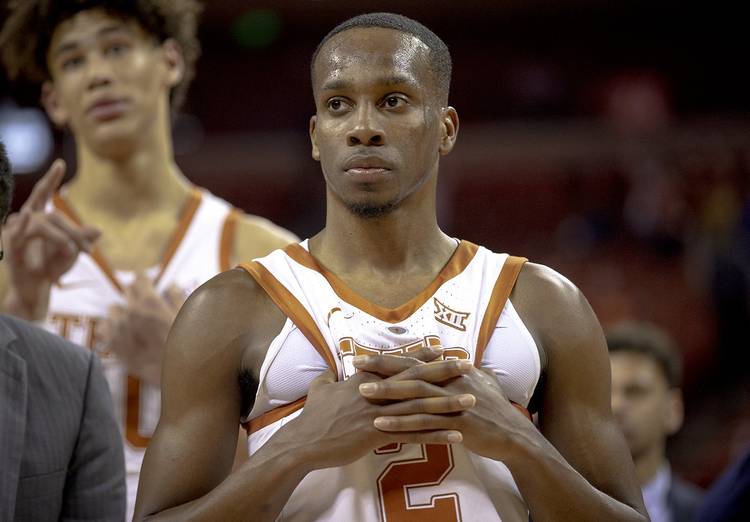 Texas guard Matt Coleman III (2) stands for the playing of "The Eyes of Texas" following Texas' 71-64 loss to Kansas State in an NCAA basketball game on Tuesday, Feb. 12, 2019, in Austin, Texas. [NICK WAGNER/AMERICAN-STATESMAN]

NORMAN, Okla. — Without suspended leading scorer Kerwin Roach II, Texas could have shrugged its shoulders against Oklahoma and just plodded through the Lloyd Noble Center.

But the Longhorns climbed their way back from a 17-point deficit and nearly pulled off one of the biggest comebacks in recent years. Still, the Sooners escaped with a 69-67 win when a last-second 3-point attempt by Matt Coleman was blocked.

OU led by five points with just under two minutes remaining. UT’s Jase Febres hit a 3-pointer, and then Dylan Osetkowski got a steal on OU’s next possession.

The Horns came down and tried to get Febres open for another 3-pointer. He missed this one, and the shot clock appeared to expire. After officials reviewed things, OU got the ball under the Texas basket. Kristian Doolittle was fouled and missed a one-and-one with 5.7 seconds left.

Coleman went the other way and tried to get up a potential game-winning 3-pointer. But OU’s Jamal Bieniemy came from behind and blocked the shot just as time expired.

Jaxson Hayes lowered his shoulder and picked up an offensive foul on the first play of the game. Thus, he had to play with caution the rest of the day. Still, Hayes was active all over the place getting multiple blocks and trying to provide the Horns with energy. Reggie Freeman is still the only Longhorn ever to record a triple-double, but the freshman from Cincinnati came close against OU. Hayes finished with 12 points, six rebounds and six blocks.

Texas could have easily folded after getting down by 17. And then the second half began, and the Sooners opened with an alley-oop dunk. But Texas quietly kept battling away and started going inside to Hayes and Osetkowski. The Longhorns were back within nine on Osetkowski’s free throw with 9:59 remaining. From that point on, it was a slow grind. Febres’ 3-pointer with 2:52 remaining made it a 3-point game as OU fans fell into a stunned silence.

Hard not to imagine what Texas’ life would be like had an offensive tackle, running back or just anybody had picked up a corner blitz at AT&T Stadium. Instead, OU quarterback and Heisman Trophy winner Kyler Murray was on hand to get honored at halftime along with Big 12 championship-winning coach Lincoln Riley.

It was the second straight year a OU Heisman winner was honored during the Texas-OU basketball game. At least Murray didn’t follow Baker Mayfield’s lead and run all over the court doing the Horns Down.

There wasn’t anything wrong with Texas’ offensive start. The Horns opened the game 4-for-8 from 3-point range and were getting good looks inside. The problem was the on the other end, as OU had better ball movement and got high-percentage looks. Midway through the first half, the Sooners went 7-for-9 from the floor and built up a 10-point lead. On the strength of a 13-3 run, OU had a 39-25 lead with 4:20 left before halftime.

Things don’t get any easier as Texas next travels to play at Baylor at 8 p.m. Wednesday. The Bears were furious about an 84-72 loss to UT in Austin earlier this month. In that game, the Horns were 8-for-20 from 3-point range and shot 55 percent overall. That confidence appears to have disappeared.