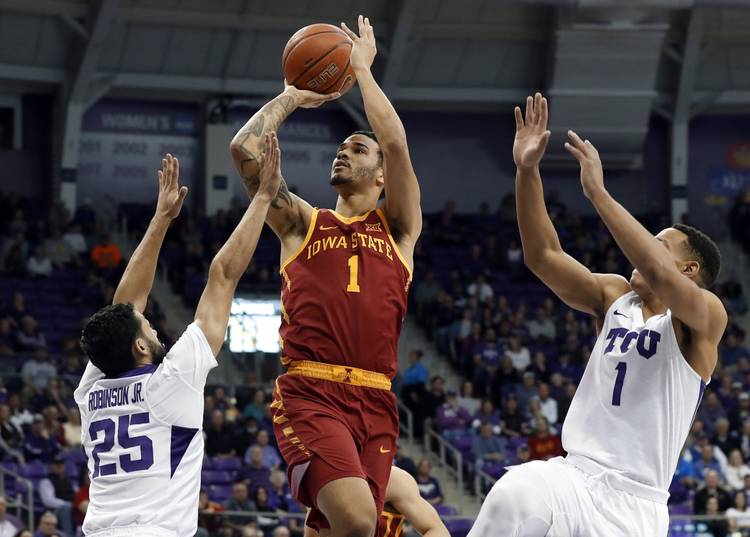 TCU's Alex Robinson (25) and Desmond Bane (1) defend against a shot by Iowa State guard Nick Weiler-Babb (1) in the first half of an NCAA college basketball game in Fort Worth, Texas, Saturday, Feb. 23, 2019. (AP Photo/Tony Gutierrez)

About the series: Texas leads the all-time series 22-17. The Cyclones recently snapped a four-game losing skid to the Longhorns with a 65-60 win in Ames on Feb. 2.

About the Longhorns: The coaching staff didn’t expect to be without senior forward Dylan Osetkowski on Wednesday against Baylor. The 6-foot-9 big man traveled to Waco but did not play due to flu-like symptoms. He’s expected to play against Iowa State. In Osetkowski’s absence, freshman Kamaka Hepa got a season-high 39 minutes in his best overall work yet. He finished with 11 points and four rebounds and went 3-for-3 from 3-point range. Fellow freshman Courtney Ramey was on fire early on and tallied up 17 points. Suspended guard Kerwin Roach II is not expected to play against the Cyclones. He’s still on an indefinite suspension for an undisclosed violation of team rules. It’s unclear if he will be reinstated before the home finale against TCU on March 9, which would also be senior night.

About the Cyclones: Coach Steve Prohm’s club is still receiving votes in the Associated Press Top 25 poll but fell from 19th this week after back-to-back losses. Iowa State rebounded on Monday with a 78-61 win over Oklahoma. Iowa State closes out the regular season with a trip to West Virginia (March 6) and then home against Texas Tech (March 9). This team is dangerous in the paint. The Cyclones rank first in the Big 12 in 2-point field-goal shooting percentage (.558). They also have been disciplined with the basketball, averaging just 10.9 turnovers per game. Nick Weiler-Babb, who made two terrific late shots to beat Texas earlier this year, is shooting almost 38 percent from 3-point range. As is typical, Iowa State is near the top of the Big 12 in long-range shooting again this season (.364), although Oklahoma State is likely to finish in first (.382).