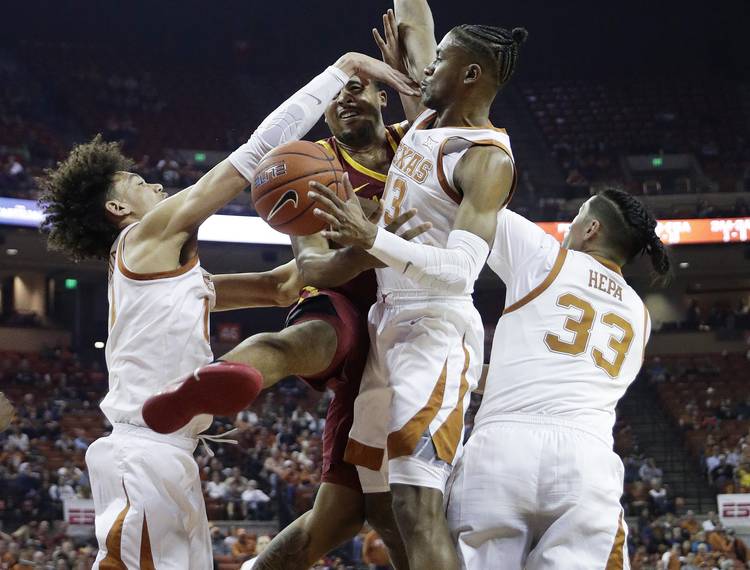 Iowa State guard Talen Horton-Tucker, second from left, is fouled as he drives to the basket against Texas defenders Jaxson Hayes, left, Jase Febres (13) and Kamaka Hepa (33) during the first half of an NCAA college basketball game, Saturday, March 2, 2019, in Austin, Texas. (AP Photo/Eric Gay)

Jase Febres once swore he’d never wear a ponytail again after his uncomfortable performance at Kansas earlier this season. But the Texas guard pulled his hair tight again Saturday and now may never go back.

Febres hit a career-high eight 3-pointers for a career-high 26 points as Texas ran away from Iowa State in a late-season Big 12 matchup.

The Longhorns (16-13, 8-8 Big 12) got a much-needed boost to their NCAA Tournament hopes and erased the memories of blowing a 19-point lead last Wednesday at Baylor.

The Cyclones (20-9, 9-7) were without suspended big man Cameron Lard. Talented scorer Nick Weiler-Babb also suffered an ankle injury in the first half and struggled the rest of the day.

Texas will take every advantage it can get at the moment. But the Horns didn’t need too many the way Febres, Courtney Ramey (18 points) and Elijah Mitrou-Long (13 points) were playing. Dylan Osetkowski also rang up 13 points and five rebounds in his first game back after missing Wednesday due to illness.

It was the second straight game UT hit 15 3-pointers and fell one shy of the high-water mark of 16 made against Grand Canyon earlier this year. That stands as the most 3-pointers the Horns have made in coach Shaka Smart’s four seasons at UT.

Offensively, Febres only does one thing — shoot 3-pointers. When he’s on, it’s rather impressive. When he’s not, the 6-foot-5 guard offers little else. But teams still must respect him either way. Febres has now hit at least five 3-pointers in three consecutive games. He had four in the first half against Iowa State and drained a fifth to open the second. The biggest play of the game might’ve come when he faked a 3-pointer, took two steps in and hit a 17-footer.

For about three minutes, Mitrou-Long was channeled his inner T.J. Ford. First, he swished a 3-pointer from the right wing to break a 23-23 tie. On the next possession, Mitrou-Long weaved his way inside and found Ramey for an easy layup. Then, Mitrou-Long was in the right place at the right time to rip the ball away for a steal, and he goes the other way and throws a lob pass to Jaxson Hayes for a dunk. All of it was part of a 12-0 run that gave the Horns a 12-point lead.

Texas, which started the day with the fourth-best scoring defense in the Big 12, played some rather awful defense in the first 12 minutes. On Iowa State’s first 16 points, 14 came in the paint. One particularly play stood out. Talen Horton-Tucker missed a 3-pointer, and George Conditt IV got his hand on the rebound while sandwiched between two Horns. Conditt scored with ease.

The Cyclones also had an early 12-8 rebounding edge. This coming three days after offensive rebounds ruined the Longhorns’ chances to win in Waco against Baylor. By halftime, Iowa State had a plus-five edge on the glass. Iowa State’s Michael Jacobson and Lindell Wigginton both had four each. Meanwhile, Hayes had just two rebounds in 17 first-half minutes. Osetkowski had three, as did Kamaka Hepa before the break.

If anyone saw Texas Tech’s recent home win over Kansas, then you saw a Red Raiders’ defense that was practically foaming at the mouth. Tech won 91-62. But the next game, Tech struggled against Oklahoma State and needed overtime to capture an 84-80 victory. Tech played at TCU on Saturday, but will host Texas on Monday in the Longhorns’ final regular-season road game of the season.