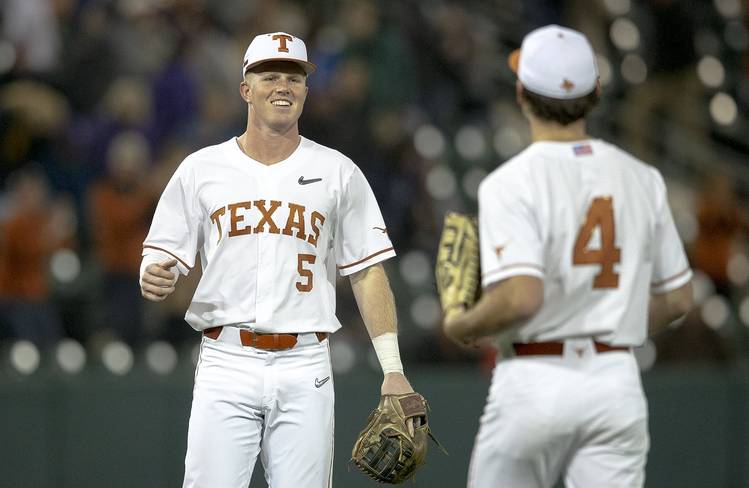 After scoring three times in the bottom of Sunday’s ninth inning, Texas walked away from this weekend with a sweep of No. 2 LSU.

Trailing 6-4 in the ninth inning, Texas got its first two runners aboard. After Lance Ford bunted his teammates into scoring position from the ninth spot in the batting order, Duke Ellis beat out an infield single to shortstop. LSU had a chance to end the game on a potential double-play grounder, but a botched play at second base left everyone safe and Masen Hibbeler crossed home plate with the tying run.

With one out, Austin Todd then grounded a ball up the middle and the speedy Ellis scored from second base.

Texas initially took a 3-1 lead during a third inning that featured Todd’s two-run homer and Eric Kennedy’s run-producing double. LSU (8-3) tied the game in the fifth frame and then doubled its score over its next two at-bats. UT third baseman Ryan Reynolds doubled home a run in the eighth inning, and the Longhorns completed their rally in the following frame.

A temperature of 42 degrees was announced after the game’s first pitch. With the exception of pitcher Coy Cobb, each of UT’s starters wore long-sleeved shirts under their jerseys. A half-dozen starters also used ski masks to keep warm on a windy and chilly day at the ballpark.

NOTABLE NUMBER: 1. Texas and LSU combined to use 20 pitchers over this weekend’s three-game series, but only one of those hurlers was left-handed. Texas senior Brandon Ivey faced two left-handed bats from the heart of LSU’s line-up on Sunday. He issued a walk and induced a groundout. The appearance was the fourth this season for Ivey, who has allowed one hit and two unearned runs over his 1 2/3 innings.

UP NEXT: Before heading to No. 11 Stanford for four games, Texas will play UT-RGV in Austin on Tuesday. Last year’s meeting between these two schools was historic as former Longhorn Jake McKenzie became the first player in school history to play all nine defensive positions in a single game.