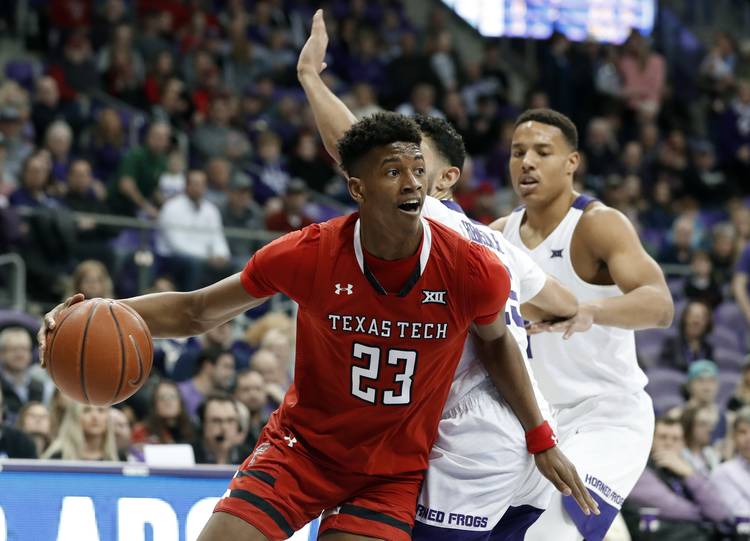 Texas Tech guard Jarrett Culver (23) gets through the defense of TCU's Alex Robinson, center rear, and Desmond Bane, right rear, in the first half of an NCAA college basketball game in Fort Worth, Texas, Saturday, March 2, 2019. (AP Photo/Tony Gutierrez)

About the series: Texas leads the all-time series 86-59. The Longhorns have not won in Lubbock since a 70-61 decision over the Red Raiders in coach Rick Barnes’ final season on Jan. 3, 2015.

About the Longhorns: It cannot be overstated the importance of bouncing back in Saturday’s win over Iowa State after what happened earlier last week against Baylor. The Longhorns gave up a 19-point, second-half lead and lost in overtime. Texas ran up a 20-point lead against Iowa State and finished off an 86-69 win. “Our guys played really, really well at Baylor, except for three or four minutes, and that cost us the game,” coach Shaka Smart said. “You’re darn right they remember that.” Courtney Ramey (seventh, .405) and Jase Febres (ninth, .392) both rank in the top 10 in Big 12 in 3-point shooting percentage. If Jaxson Hayes can hold off Tech’s Tariq Owens, the Longhorns will have an individual lead the Big 12 in blocks for a second straight year. Both Hayes and Owens average 2.4 blocks per game. Both have 69 blocks total.

About the Red Raiders: Coach Chris Beard’s club has amassed more league victories than any Tech team since the 1995-96 club that went 14-0 in Southwest Conference play. But the Red Raiders are now feeling the full weight of being the favorite in some of these close games. After thumping Kansas at home, Tech struggled against Oklahoma State and needed overtime to win. TCU had Tech on the ropes before losing 81-66. Jarrett Culver has a strong case for Big 12 player of the year honors. He ranks third in the league in scoring (17.9), ninth in rebounding (6.2) and sixth in assists (3.7). Owens has recorded at least one block in every game this season. He needs two more to tie the Tech season record held by Tony Battie (71).