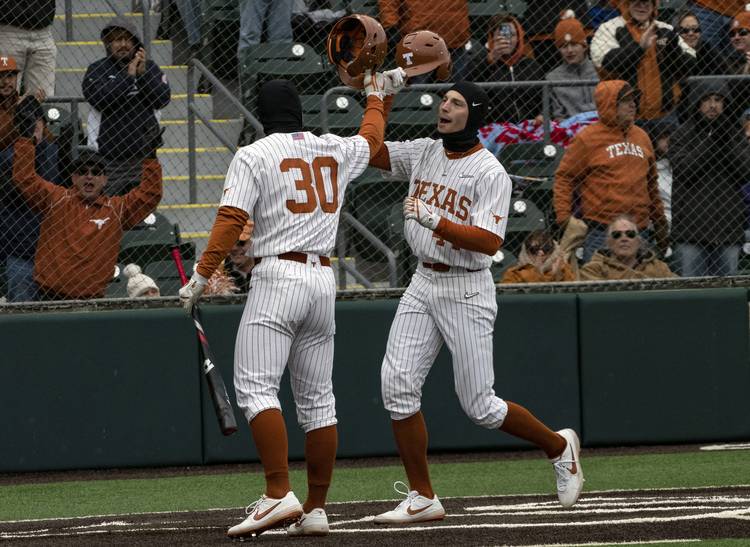 Texas outfielder Austin Todd (right) celebrates his two-run homer with Eric Kennedy during a 7-6 win over LSU on March 3, 2019 in Austin. [Rodolfo Gonzalez for American-Statesman]

Texas has now earned at least one weekly award during each of the season’s three weeks. Pitchers Bryce Elder (pitcher of the week) and Coy Cobb (newcomer of the week) have also been honored this year.

The weather was cold, but their performances were 🔥 against top teams in Week 3.

Todd produced a .357 batting average and seven RBIs over the four games he played in last week. In a 7-6 win over LSU on Sunday, Todd homered and later hit a walk-off single in the ninth inning. He had multiple hits in two of UT’s three wins over an LSU team that was ranked second in the nation.

Kennedy also played in four of UT’s five games last week. The freshman left fielder gathered at least one hit in each of his appearances. In the LSU series, Kennedy accounted for six RBIs and three runs.

This week, Texas (10-3) will host UT-RGV on Tuesday before traveling to No. 6 Stanford for a four-game series. UT is ranked 12th in D1Baseball’s most-recent poll of the NCAA’s top baseball teams.