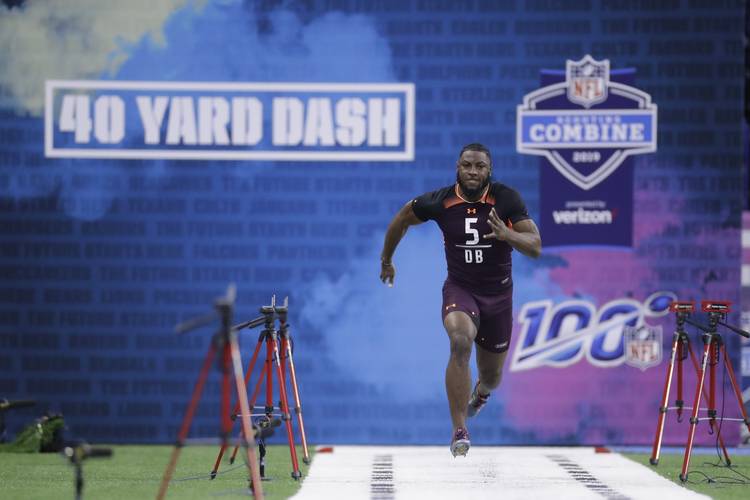 With the NFL’s annual draft set to kickoff on April 25, five former Longhorns recently journeyed to Indianapolis for a job interview.

Texas sent five of its former players to the 2019 NFL Combine, which concluded its workouts on Monday. Defensive backs Kris Boyd and Davante Davis, linebacker Gary Johnson, defensive lineman Charles Omenihu and receiver Lil’Jordan Humphrey all participated in the event. Official measurements, a workout, interviews and position drills are all a part of the combine experience.

Listed below is a look at how UT’s five representatives performed in some of their drills. These prospects will get another chance to workout in front of the NFL scouts at UT’s pro day on March 27.

If a question asked to Boyd during a team interview didn’t catch your attention, the Gilmer native’s workout should have. Boyd showcased both his strength and speed in Indianapolis. Boyd led all of the cornerbacks with his 19 reps on the bench press. A time of 4.45 seconds in the 40-yard dash was tied for the eighth-best at Boyd’s position.

Davis did not generate the same buzz as Boyd but he fared well. Among cornerbacks, Davis boasted the fourth-best time in the three-cone drill. He also bested the averages posted by cornerbacks in the bench press and broad jump.

Boyd and Davis accounted for 25 of the 28 starts that Texas needed at the cornerback position this past season. In a 41-34 win over Texas Tech, they combined to force three turnovers in the red zone.

Humphrey posted the slowest time among the 37 receivers who participated in the 40-yard dash. He also posted below-average marks in events like the bench press and vertical jump. Humphrey is coming off a season in which he led Texas in receptions (86), receiving yards (1,176) and touchdown catches (nine). He had a year of eligibility remaining when he declared for the NFL Draft in January.

The linebacker who has never hid from his dislike of quarterbacks and running backs just proved that he is also faster than most of his offensive enemies. Johnson was clocked at 4.43 seconds in the 40-yard dash on Sunday. Among the 56 quarterbacks and running backs that ran in Indianapolis, only Oklahoma State’s Justice Hill had a better time. (It should be noted that Oklahoma wunderkind Kyler Murray did not run). Johnson tackled a team-high 90 opponents and all-conference honors during his senior year at Texas.

Omenihu did not participate in the bench press, but he did well in the agility drills. Among the defensive linemen in Indianapolis, Omenihu claimed the second-best mark in the vertical jump while posting top-ten performances in the 40-yard dash, three-cone drill and broad jump. The Big 12’s defensive lineman of the year in 2018, Omenihu recorded 9.5 sacks during his senior season.