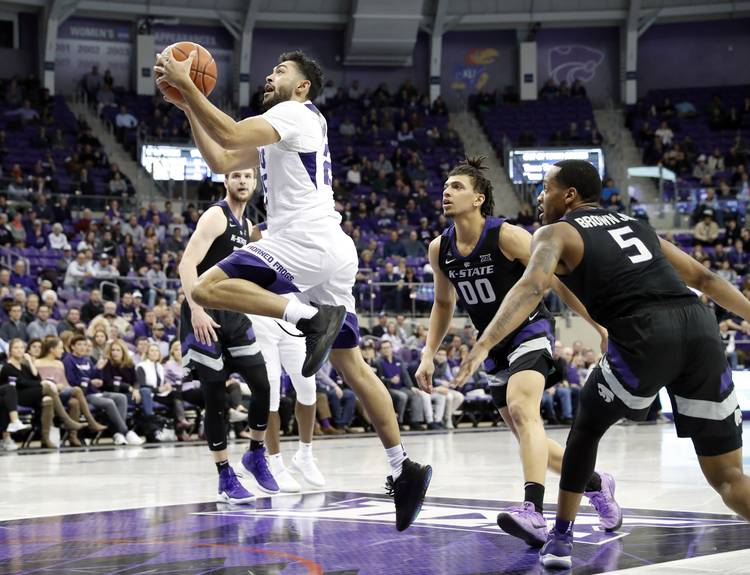 TCU guard Alex Robinson (25) gets through Kansas State's Dean Wade (32), Mike McGuirl (0) and Barry Brown Jr. (5) for a shot in the second half of an NCAA college basketball game in Fort Worth, Texas, Monday, March 4, 2019. (AP Photo/Tony Gutierrez)

About the series: Texas leads the all-time series 108-67. However, the Horned Frogs have won four of the last seven games. That includes a 65-61 decision over UT in Fort Worth on Jan. 23.

About the Longhorns: Suspended senior guard Kerwin Roach II, who ranks 20th on UT’s all-time scoring list with 1,318 career points, will not expected to play. However, Roach will be honored in a pre-game ceremony along with fellow senior Dylan Osetkowski. Coach Shaka Smart said the team will have a statement next week about Roach’s status for the Big 12 tournament. The Horns have been moving right along without Roach, who was the leading scorer before his suspension four games ago. Jase Febres averaged 21.3 points in three games before managing only four against Texas Tech, which has the nation’s No. 1-ranked defense. Matt Coleman III is averaging 10.8 points in the last four games while Courtney Ramey put up 12.3. With a win, Texas could secure a non-losing Big 12 record for the first time in three seasons.

About the Horned Frogs: TCU held senior night on Monday for its two veterans, JD Miller and Alex Robinson, but redshirt freshmen Kevin Samuel went 8-for-11 and had 17 points in a 64-52 loss to Kansas State. It was a season-low point total for the Frogs, who have lost six of the last seven games and are likely headed to the NIT. TCU also had a season-low 24 rebounds and tied the season low with only seven made free throws. What’s odd is that TCU is scoring plenty of points; the Frogs rank third in Big 12 play at 72.1 points per game. But they play lackluster defense and rank ninth in points allowed (76.1). Coach Jamie Dixon’s club also has the third-worst turnover margin total in Big 12 play. Desmond Bane and Robinson are now both tied for 21st on the school’s all-time scoring list with 1,128 career points.