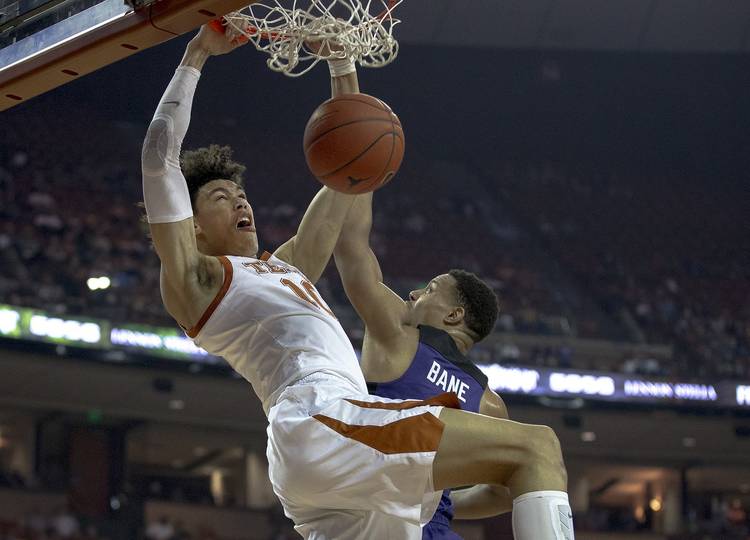 Desmond Bane just unloaded on senior day. On Texas, that is.

The TCU junior came to Austin and went wild, hitting six 3-pointers and racking up a career-high 34 points as the Frogs ran the Longhorns out of their own building in a 69-56 win.

For Texas, it was an another embarrassing low point in a season full of wild inconsistencies. The Longhorns (16-15, 8-10 Big 12) are now on the wrong side of the NCAA Tournament bubble heading into the postseason.

When it appeared the Horns were climbing back from a 20-point deficit, Bane came flying in from nowhere for an acrobatic tip-in. It was that kind of day for TCU (19-12, 7-11) on the final day of the regular season.

Even ESPN bracketologist Joe Lunardi couldn’t believe what he was watching. One of UT’s biggest defenders as far as the NCAA was concerned, Lunardi said on the broadcast he was struck by “how poorly Texas is playing” and how much danger the Horns were putting themselves in.

Jaxson Hayes had 19 points to lead Texas, and Matt Coleman III added 12 more. But this was solely about heart and hustle. TCU had a plus-11 rebounding edge, which masked its 15 turnovers.

Bane was sensational. He opened the second half with a 3-pointer shot from a South by Southwest panel on Congress Avenue. With 10 minutes left in the game, Bane was 10-for-12 shooting. He was also 4-for-4 from 3-point range at that point. The guy simply couldn’t miss. He tied his career high with another 3-pointer with 9:25 remaining. At that point, TCU was shooting 63 percent for the day and had almost a 20-point lead.

Seniors Dylan Osetkowski and Kerwin Roach II were both honored before their final home game at Texas. Osetkowski also got the first play called for him. The 6-foot-9 San Diego native missed a turnaround jumper but later had a tip-in and finished the first half with seven points. Roach remains suspended for a violation of team rules, but he will likely return for the postseason. Coach Shaka Smart said Friday the team would have “announcement” about Roach’s status next week.

This question must be asked: was today Hayes’ last home game at Texas? The 6-foot-11 freshman has spectacular upside, no question. That’s why NBA scouts have been in and out of the Erwin Center the last two months. Hayes had a strong layup and dunk on back-to-back possessions. But some may argue that’s the length of his offensive game. Something to think before calling him an instant NBA lottery pick: not once this season has Hayes posted a double-double.

The Frogs are down to a seven-man rotation, and assistant coach Corey Barker was placed on administrative leave after being linked to the FBI corruption case. But TCU marches on. The club shot 40 percent or better in four of the last five games. Shooting kept the Frogs in this one.

They were 10-for-20 and had a two-point lead with about four minutes left in the first half. Bane started 5-for-7 and capped an 11-0 run with a run-out layup and 3-pointer. What was even worse for the Horns, the Frogs had a plus-10 rebounding edge at halftime.

The Longhorns are likely to be the No. 6 seed in next week’s Big 12 tournament, but the final bracket will be finalized Saturday night. If Texas firms up that spot, UT would likely face No. 3 seed Kansas at approximately 8 p.m. Thursday at Sprint Center in Kansas City, Mo.

It would be the first time the Jayhawks have played the nightcap game in more than a decade. Kansas typically played the lunchtime game as the No. 1 seed having won the Big 12 title 14 straight years, a streak that was broken this season.

A pair of Longhorns reach podium at NCAA Indoor Championships