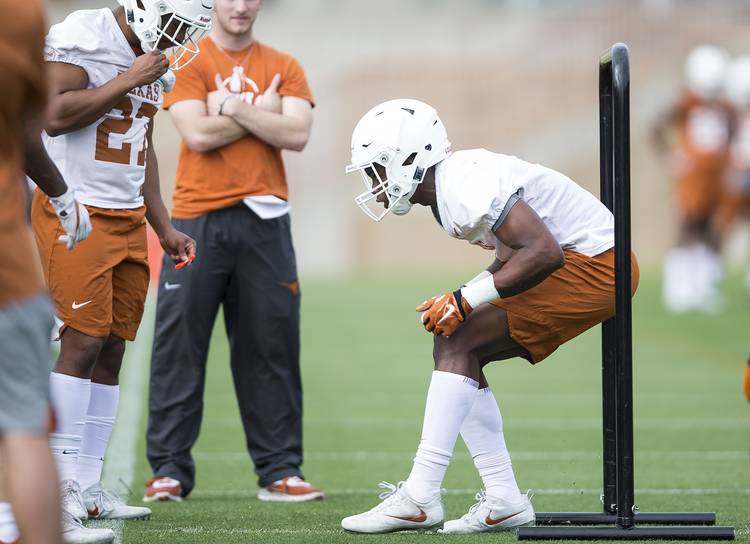 Texas defensive back Anthony Cook runs through a drill during a spring practice at the Frank Denius practice fields in Austin on March 22, 2018. NICK WAGNER / AMERICAN-STATESMAN

Texas held its first practice of the spring on Monday morning, and the media was granted access to around 20 minutes of drills. Here are three observations:

1. The class roster at DBU looked a little different on Monday. Kris Boyd and Davante Davis, who were UT’s starting cornerbacks this last season, have exhausted their eligibility and are currently preparing for life in the NFL. Versatile nickel back P.J. Locke was also a senior in 2018. A 23-time starter at safety, Brandon Jones won’t practice this spring because of an ankle injury.

So, Texas had four new starters in its secondary when it ran its first defensive drills in front of the media on Monday. Sophomores Anthony Cook and Kobe Boyce were the cornerbacks. Junior Chris Brown lined up alongside returning safety Caden Sterns. Sophomore B.J. Foster was Locke’s replacement.

After starting 13 times as a freshman, Sterns is the veteran of this group. Brown and Foster, though, have multiple starts on their resume. Boyce and Cook were Texas’ starting cornerbacks at Oklahoma State this past October.

Fans of the UT depth chart shouldn’t let the ink dry on this exact line-up. Texas, after all, expects Jones to return this summer. Since he was flagged for targeting and ejected at the end of the Sugar Bowl, Cook must sit out the first half of UT’s season opener against Louisiana Tech.

2. Speaking of defensive backs, sophomore D’Shawn Jamison was running with the cornerbacks on Monday. Jamison was rated as a four-star defensive back when he joined UT’s 2018 recruiting class. Needing depth on offense, Texas converted Jamison into a slot receiver this past season. He made one start at the “H” position.

This off-season, Jamison hinted at a return to defense on social media. He is now only listed as a defensive back on the Texas roster. The Longhorns, however, do not have an offensive player who also wears No. 17, so Jamison could conceivably still play offense.

3. For the first time in years, Texas won’t have to answer many questions about its starting quarterback this spring. Returning starter Sam Ehlinger should enter his junior year as a Heisman Trophy candidate.

Who will back up Ehlinger, though? Shane Buechele and Cameron Rising were behind Ehlinger on last year’s depth chart, but they will play at SMU and Utah this fall. As expected, redshirt freshman Casey Thompson took the second-string snaps in front of the media on Monday. In his first-ever practice with the Longhorns, early enrollee Roschon Johnson was QB3.

Forgettable fourth inning leads to a lost series at No. 6 Stanford for No. 12 Texas