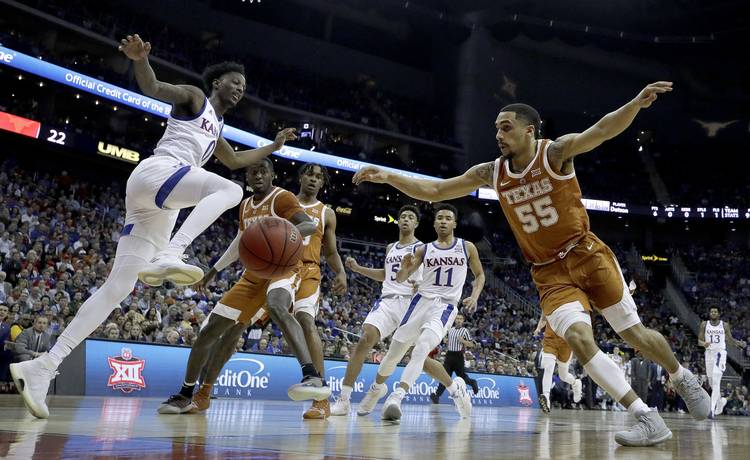 KANSAS CITY, Mo. — Who really knows how ESPN calculates its analytics, but the network offered up a rather startling statistic during Thursday’s broadcast of the Texas-Kansas game.

The Longhorns had a 51 percent chance of making the NCAA Tournament if they beat the third-seeded Jayhawks. If Texas lost, the team’s NCAA chances dropped to 8 percent.

The Longhorns are now 16-16 this season thanks to a disappointing second half where they shot 33.3 percent. They missed their final six shots and likely shot their way out of the postseason. Dylan Osetkowski had 18 points, and Jase Febres had 11 points. But they really didn’t have much help from anyone else.

It was a four-point game down the stretch, but Eli Mitrou-Long got tied up for a jump ball and Kerwin Roach II missed a long 3-pointer. It was Roach’s first game back after a five-game suspension for an undisclosed violation of team rules.

Osetkowski has talked about the importance of playing like a senior, as if every game was his last. The senior finished his Big 12 career with a strong performance against the Jayhawks. He practically did it all for long stretches in the game. The post-up move worked, and he swished a critical 3-pointer before Kansas pulled away for good.

Texas freshman Jaxson Hayes is likely to put his name into the NBA draft this summer, although the Cincinnati-raised big man hasn’t committed one way or the other. Next season, freshman Courtney Ramey could be the undisputed leader. He’s got the heart, the hustle and moxie you expect from senior leaders. Ramey finished with six points, but at least he was hustling when other veterans gave the Horns almost nothing.

It’s tempting to rag on UT’s ragged offense in the first half, but the defense was rock solid. The Horns’ pick-and-roll offense was just so-so as Courtney Ramey and Matt Coleman III had confused looked at times. But on the other end, the Horns were all over the Jayhawks. Kansas shot 42.9 percent in the first half and was 1-for-5 from 3-point range. The teams were tied on the scoreboard at halftime (29-29) and tied in rebounds, too. Both clubs had 17 boards at the break.

Hayes picked up his second foul with 11:32 left in the first half, which put more emphasis on Jericho Sims and Royce Hamm Jr. to contribute. Sims was 3-for-3 and had three rebounds in the first half. In fact, one of Sims’ dunks was a terrific, man-sized, one-handed jam. Coaches have been dying to see that all season. Meanwhile, Hamm had three chances for a layup on one possessions. He went 0-for-3 in a matter of seconds. He was 0-for-4 with three boards in the first half.

Now, the Longhorns head back to Austin to await their fate on Selection Sunday. ESPN bracketologist Joe Lunardi had Texas has one of the last four teams into the field of 68 before playing Kansas. Alas, Texas was going to be in the play-in games in Dayton, Ohio, according to Lunardi. We’ll see. No .500 team has ever been picked as an at-large team, although UT’s strength of schedule and overall NET ranking will be factors in its favor.