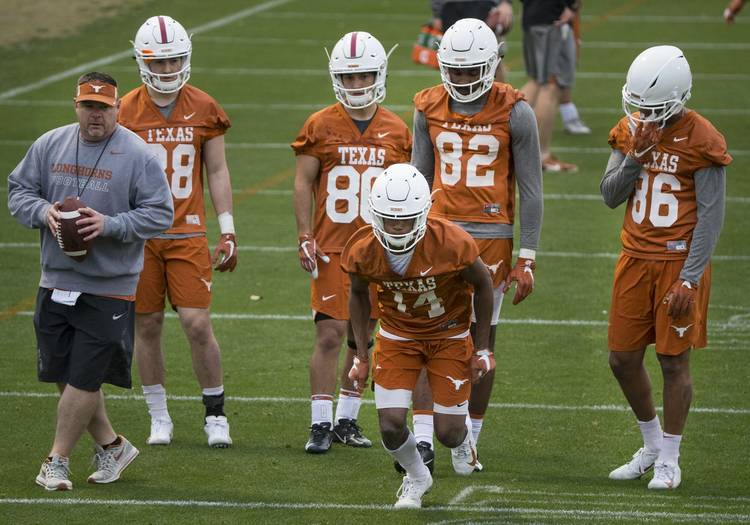 While in town last week to speak on a SXSW panel, former NFL receiver Chad Johnson noted that he was staying near the Texas campus. So, Johnson went on Twitter to see if any of the UT football players wanted to get a workout in.

Texas quarterback Sam Ehlinger saw Johnson’s tweet and replied that he’d be happy to throw around the football. Alas, Ehlinger told reporters on Wednesday that nothing came of his tweet. The only Ochocinco that Ehlinger will throw to this spring is redshirt freshman Malcolm Epps, who wears No. 85.

Epps, who appeared in two games last year, is among the young receivers that will get a chance to showcase their skills this spring. Texas does boast some experience among its pass-catchers as the returning wide receivers have combined for 58 starts and 291 receptions.

But Collin Johnson (22 starts, 150 catches) and Devin Duvernay (17 starts, 70 catches) opened this spring on the injury report. John Burt (17 starts, 58 catches) is focusing on the outdoor track and field season. D’Shawn Jamison (one start, four catches) has returned to the Texas defense.

That leaves sophomore Brennan Eagles as the only practicing receiver who has started a game at Texas. (Eagles’ start against Maryland last year was recorded only because Johnson was sidelined for Texas’ first offensive snap because of the NCAA’s new dress code.) Epps and sophomores Joshua Moore and Jordan Pouncey have played in games at Texas. Al’Vonte Woodard took a redshirt for the entire 2018 season. Five-star freshman Bru McCoy has enrolled early, and he will soon be joined by fellow recruits Jake Smith, Kennedy Lewis and Marcus Washington.

When asked about working with a younger set of receivers this spring, Ehlinger said the positives were “Being able to have the younger guys come in and learn the offense and know the ins and outs of where I’m trying to put the ball and where they need to be in certain situations and what I’m seeing. Just for me, adapting to their speeds and their size. You’ve got to know your personnel on every throw.”