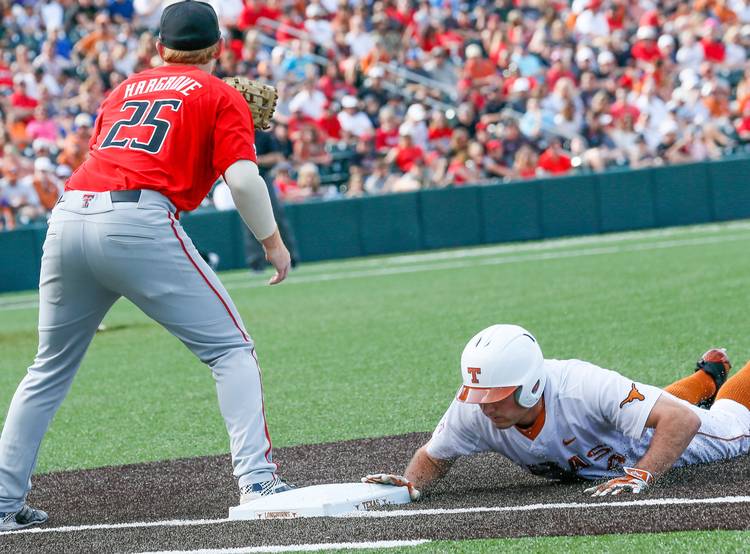 Tate Shaw (#4) beats a pick-off attempt back to first base during a game against Texas Tech at UFCU Disch-Falk Field in Austin on March 18, 2017. (Andy Nietupski for AMERICAN STATESMAN)

In what was the conference opener for both Texas and Texas Tech, the Longhorns overcame an early deficit at UFCU Disch-Falk Field on Friday.

Texas starter Bryce Elder walked three straight batters with two outs in the third inning, and Texas Tech made the right-hander pay for his generosity with back-to-back run-scoring hits. Trailing 3-0, Texas clawed back into the game with two sacrifice flyouts. The Longhorns eventually grabbed a 4-3 lead in the sixth inning when Red Raider third baseman Josh Jung committed a two-run, two-out error.

After Elder went five innings, relievers Ty Madden and Kamron Fields shut the door on Texas Tech. Madden, who earned the win, and Fields, who recorded a three-inning save, did not allow a base-runner over their four innings of work. Only four Division I teams entered the weekend with a better scoring average than Texas Tech’s 9.1 runs per game.

The Big 12’s regular-season champion in 2018, Texas improved its record to 14-6. Texas Tech is now 11-4. The Red Raiders and Longhorns were ranked 11th and 12th in the D1Baseball poll this week.

It’s been one year since we lost a legend. Thanks for everything, Augie. #RIPAG16 🤘 pic.twitter.com/qEte8Qz0AU

Texas took a moment ahead of Friday’s national anthem to observe the one-year anniversary of former coach Augie Garrido’s death. A 30-second video that UT had previously shared on its social media platforms was played on the stadium’s video board. Garrido coached at Texas from 1997-2016. He won 824 games and two national championships with the Longhorns.

NOTABLE NUMBER: 14: Since David Pierce’s hire ahead of the 2017 season, Texas is 14-10 against the ranked teams it has played at UFCU Disch-Falk Field. Dating back to last season, Texas has been victorious in six straight home games against ranked teams. The last ranked team to beat Texas in Austin was Tennessee Tech, which was regarded as the nation’s 20th-best team when it knocked off UT in the opening game of last year’s super regional.

UP NEXT: Both teams will have seasoned arms on the mound when this series resumes at 2:30 p.m. on Saturday. Texas is expected to start RHP Blair Henley (2-0; 4.79 ERA) against RHP Caleb Kilian (0-2; 9.19). A junior, Kilian was the winning pitcher in Texas Tech’s 16-5 rout of UT in Lubbock last year. Henley, who is also a junior, earned a no-decision the following day in a 7-5 Texas triumph.