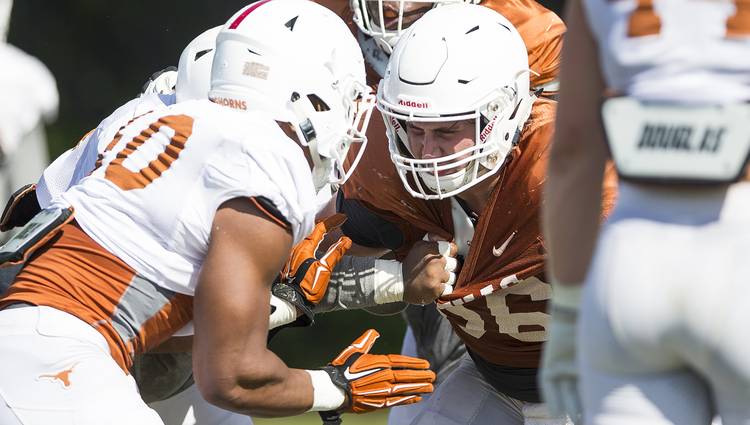 Texas held its third practice of the spring on Friday morning, and the media was granted access to around 20 minutes of drills. Here are three observations:

1. While practicing its blocking schemes, Texas trotted out a first-string offensive line that featured tackles Samuel Cosmi and Denzel Okafor, guards Tope Imade and Derek Kerstetter and center Zach Shackelford. With 27 career starts, Shackelford is the most-seasoned among the Longhorn linemen.

Shackelford, however, has been sidelined by injuries during portions of Texas’ last three seasons. Elijah Rodriguez, who started four times at center in 2018, has exhausted his eligibility, so questions must be asked about who Shackelford’s back-up will be. On Friday, the answer was freshman Rafiti Ghirmai.

Ghirmai redshirted during the 2018 season. The 6-5, 300-pound Frisco native was rated as a four-star offensive tackle when he joined UT’s 2018 recruiting class. Ghirmai was among the young linemen that Texas coach Tom Herman said stood out during last year’s preparation for the Sugar Bowl.

2. With the media looking on, sophomore Rob Cummins worked with the third-team defense as a defensive end. Last year, Texas moved Cummins to tight end. Cummins drew praise from Herman for his development at a new position, but a knee injury ended his season in August.

Cummins was regarded as a three-star defensive lineman in high school. The 6-5, 260-pound Cummins will wear No. 90 this season after wearing No. 99 a year ago. He donned a No. 92 jersey during his redshirt year in 2017.

3.  Neither of the Longhorns who wear No. 1 jerseys were a full-participant in Friday’s practice. As he recovers from a neck injury, freshman linebacker DeGabriel Floyd had a green non-contact jersey on. Senior receiver John Burt won’t return to the football team until the fall.

Burt is focusing on track and field this spring. Burt recently finished fifth in the 60-meter hurdles at the NCAA’s indoor meet. UT’s outdoor season begins this Friday, and Burt is regarded as a national contender in the 110-meter hurdles.

During Herman’s first off-season at Texas, Burt did not compete in a track meet until after the football team had completed its spring practices. Burt juggled catching footballs and hurdling last spring, but football was considered his top priority. This spring, Burt is only working out with the track team.

Said Herman on Monday: “We feel like he’s got a chance to be the national champion in the hurdles and maybe even make a run internationally. We want him to have every opportunity to go practice that, but we expect him to be back in August for fall camp.”