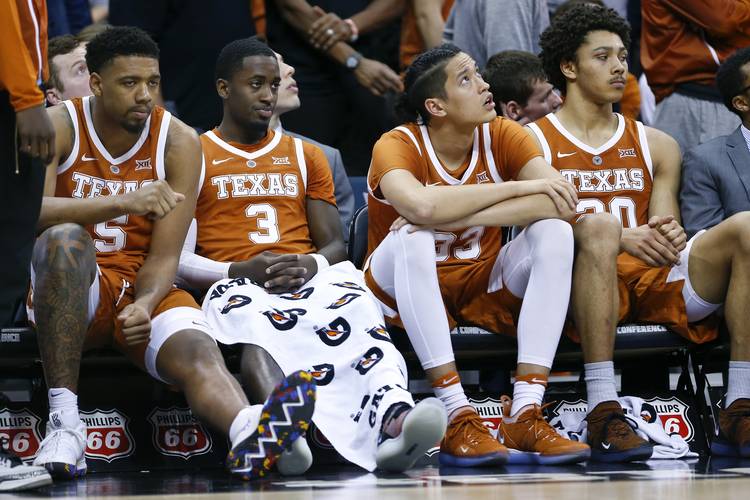 A somber Texas bench waits for the final seconds to tick away during the second half of an NCAA college basketball game against Kansas in the Big 12 men's tournament Thursday, March 14, 2019, in Kansas City, Mo. Kansas defeated Texas, 65-57. [Chris Neal/The Capital-Journal]

The NCAA Tournament selection committee invited plenty of Big 12 teams to March Madness. But Texas wasn’t one of them.

The Longhorns did not hear their name called Sunday when the field of 68 was unveiled on CBS. Texas finished 16-16 this season. No .500 team has ever been an NCAA at-large selection.

The Longhorns were named a No. 2 seed in the NIT bracket unveiled Sunday night. Texas will host South Dakota State (24-8) at 8 p.m. Tuesday at the Erwin Center.

The Jackrabbits, powered by senior scoring sensation Mike Daum, won the Summit League this season. Daum averaged 25.3 points this season and ranks sixth among all Division I players since 1985 with 3,042 career points.

Tickets are available through the Texas box office at $12 or $14. The upper bowl inside the Erwin Center will be closed.

Texas has not played in the NIT since 1986. The Longhorns won the event in 1978 by going 4-0 and knocking off North Carolina State in the championship.

Texas, which finished the season 1-5 down the stretch, was ranked 38th in the NCAA’s new NET rankings, a new analytic tool designed to better rank teams based on wins, losses and where it happened.

But this now becomes the second time in coach Shaka Smart’s four seasons that Texas did not make the NCAAs. The American-Statesman reported Friday that UT administrative sources said that Smart would return for a fifth season.

It wasn’t like the NCAA selection committee wasn’t looking for Big 12 teams.

Oklahoma, which had a 7-11 league record, made the cut as a No. 9 seed and will face Ole Miss. OU athletic director Joe Castiglione used to be a member of the selection committee and helped the team put together a strong non-conference schedule.

Co-champions Kansas State and Texas Tech were sure to make it, as was the Big 12’s third-place finisher Kansas. Baylor and Iowa State also made the cut.

TCU was thought to have a strong chance to be one of the last four teams in. However, several mid-major upsets in conference tournaments likely pushed the Horned Frogs down and eventually out.