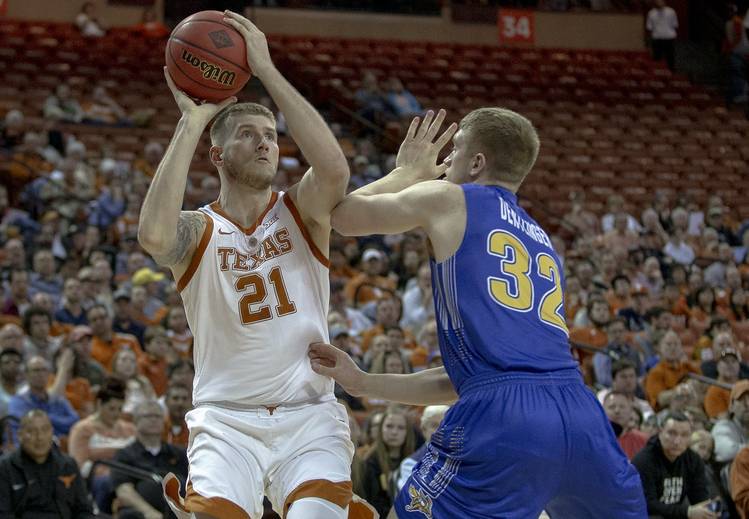 The NIT is the college basketball equivalent of an early December bowl game. The winner is solely determined by who truly wants to be there.

Ignored by the NCAA Tournament selection committee, Texas came out locked and loaded Tuesday against South Dakota State. The Longhorns built up a 19-point lead and looked downright incredible in the opening minutes.

But the Longhorns have blown 19-point leads before, and sure enough, they did it yet again in the postseason.

South Dakota State’s Mike Daum got into a terrific back-and-forth battle against UT’s Dylan Osetkowski, who was facing the prospect of this being his final collegiate basketball game. After South Dakota State came all the way back and went up by three, Osetkowski had a career-high 26 points and carried Texas to a 79-73 victory.

Texas (17-16) advance to the second round of the NIT and will play the winner of Xavier-Toledo.

Osetkowski must’ve taken the challenge of taking on Daum personally. The Longhorns senior averaged 10.4 points this season, but he was unafraid to shoot from anywhere and was rewarded. He started the game 7-for-10 and had four 3-pointers. He then turned on the defense, forcing two turnovers in the open floor against Daum. The first run-out ended with a foul. The second ended with a dunk, giving Texas a 70-67 lead. A mid-range hook shot helped Osetkowski tie his career high. A free throw with 59.8 seconds left gave him a new high-water mark.

When the going got tough, Daum got going. The three-time Summit League player of the year had a rather slow start to this one. He came in averaging 25 points and ranked ninth in Division I history in scoring. Daum finally got cooking in the second half and had two buckets that got South Dakota State within one.

After the Jackrabbits took the lead, Daum took an outlet pass the other way off a Kerwin Roach II turnover for a dunk. In his 54th career double-double, Daum finished with 25 points and 11 rebounds. But that turned out to be SDSU’s last bucket for a while. The Jackrabbits went 4:59 before their next score, going 0-for-4 during that time thanks to strong defense, mostly by Osetkowski. Only problem was Texas couldn’t pull away and close the door.

Texas led 31-15 after freshman Gerald Liddell’s impressive bucket with 10:04 left in the first half. But then, the Horns would miss nine straight shots, opening the door for the Jackrabbits, who got 3-pointers from Alex Arians and Skyler Flatten. Daum, who hadn’t scored up to that point, came flying through the lane for a two-handed dunk that got SDSU within four. Finally, Jase Febres hit a 3-pointer from the left corner with 3:55 before the break to snap the skid on UT’s 10th shot attempt.

The South Dakota State radio announcer told his audience back home this game was being played before a “mostly empty Erwin Center.” At least the home team came out ready. Texas jumped out to a 19-0 run with a dazzling array of 3-point shooting. Osetkowski, Roach, Osetkowski again, Roach again and then Courtney Ramey all showed little problem with the slightly extended 3-point line used in the NIT.

The Horns started the game 9-for-13 shooting (69.2 percent) and had a 24-8 lead after Osetkowski’s dunk. The senior from San Diego had a game-high 12 points at halftime but oddly enough just one rebound in nine minutes played.

Texas will meet the winner of the Xavier-Toledo game, which is scheduled for 7 p.m. Wednesday in Cincinnati. The NIT has not schedule the exact date and time, however UT officials think it will be either Saturday or Sunday. Since Texas is the higher seed in the NIT bracket, the Horns are likely to host.