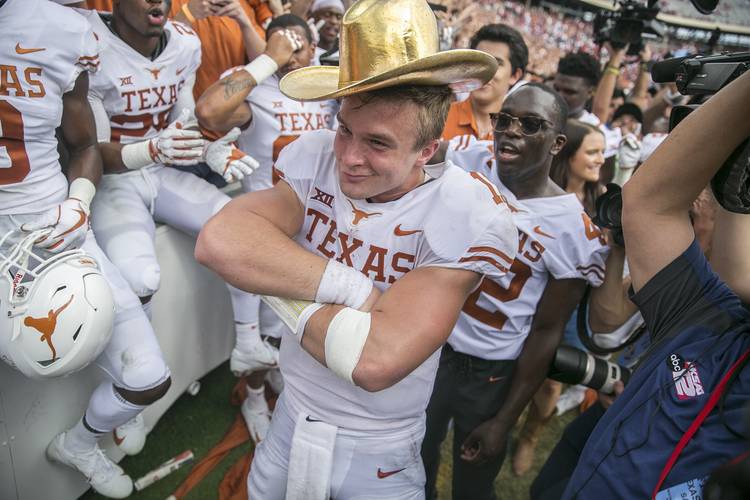 Texas quarterback Sam Ehlinger (11) celebrates with his teammates as he wears the Golden Hat during an NCAA college football game at the Cotton Bowl Stadium in Dallas Texas on Saturday, Oct. 6, 2018. [RICARDO B. BRAZZIELL/AMERICAN-STATESMAN]

Chalk up three losses for the Longhorns before the 2019 season begins. At least that’s how online casino betonline.ag sees it for Tom Herman’s Sugar Bowl-winning crew.

In an press release sent Tuesday, the sports book released “The very first opening point spreads for 45 of the biggest college football games ” for 2019.

Texas is pegged as an underdog in three of them — a home tilt versus LSU on Sept. 7. Betonline lists the Tigers as a 7-point favorite.

In October, the Sooners are slated to trounce Texas by 17 points. Jalen Hurts just might be an upgrade over Heisman Trophy winner and potential first pick in the NFL draft Kyler Murray.

Texas starts as a 2.5-point road dog to TCU when the Longhorns meet the Horned Frogs in Fort Worth on Oct. 26.

Despite Oklahoma losing Murray, all-conference wide receiver Marquise Brown, and four starting all-conference offensive lineman, the Sooners will be 20 points better than Texas than the 2018 team that made it to the College Football Playoffs.

Last year, Texas won the annual matchup 48-45 on Cameron Dicker’s last-minute field goal. The previous six games between the schools have been decided by 16 points or fewer.

The Longhorns were a eight-point underdog in last year’s game but led Oklahoma by as many as 21 points late in the game.