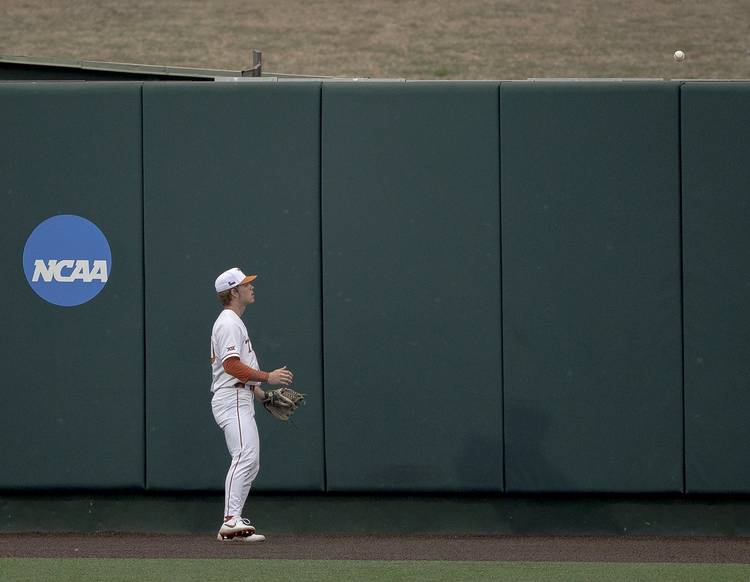 Texas outfielder Eric Kennedy (30) watches the ball clear the fence for an Arkansas grand slam during an NCAA baseball game on March 19, 2019, in Austin. [NICK WAGNER/AMERICAN-STATESMAN]

Texas was no match for Arkansas in a Tuesday tussle between two old foes from the Southwest Conference.

Both teams went down in order during the opening inning at UFCU Disch-Falk Field, but Arkansas sent nine batters to the plate in the second session. The Razorbacks exited the frame with a 6-0 lead after Christian Franklin hit a grand slam and Heston Kjerstad crushed a solo shot. Building an insurmountable advantage, Arkansas added five more runs over the next two innings.

Texas never threatened Arkansas’ lead, but the Longhorns did collect some offense. Tate Shaw broke up the shutout with a two-run double in the fourth frame. In his first plate appearance since homering in last Tuesday’s 17-3 win over Texas Southern, freshman Caston Peter went deep for the second time this season.

In this week’s D1Baseball poll, Texas (15-8) and Arkansas (18-2) were ranked ninth and 11th. Texas and Arkansas will close out their two-game series on Wednesday.

First pitch-swinging and it's a solo bomb!

Kjerstad’s second-inning homer was the third allowed by Texas since the beginning of the ninth inning of Sunday’s 4-3 win over Texas Tech. Before Josh Jung launched a baseball over the fence for the Red Raiders, UT had not surrendered a home run at home since the second game of last year’s super regionals (134 innings). Opponents on UT’s 2019 schedule have hit a Big 12-low five homers off the Longhorns.

NOTABLE NUMBER: 5. Dating back to the 2012 season, Tuesday’s loss was UT’s fifth straight to Arkansas. For Texas, that five-game losing streak is the longest active skid against any NCAA team. The Longhorns, however, do own a 74-37 lead in the overall series to the Razorbacks.

UP NEXT: UT and Arkansas will wrap up this non-conference series on Wednesday night. As of Tuesday’s final pitch, neither team had announced a starting pitcher.