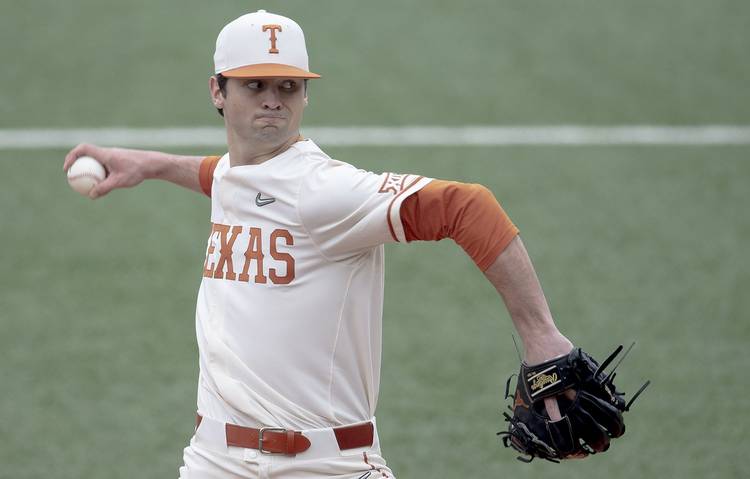 When he starts at TCU’s Lupton Stadium on Saturday night, Texas junior Blair Henley will have nearly two dozen members of his fan club in the stands.

Henley grew up in Fort Worth, so this weekend will serve as a homecoming. Henley said his mother has secured around 25 tickets for Saturday’s showcase. His parents, though, are TCU graduates and he couldn’t guarantee that everyone getting a ticket is a Texas fan.

“(My parents) do a house divided sort of thing, so they’ll have orange and purple. They’re weird like that,” Henley said.

Among the things that Henley is looking forward to this weekend is Stacey Henley’s shepherd’s pie. He’ll also get to face a TCU team that is ranked 22nd in the D1Baseball poll. Only six teams in the NCAA are hitting better than TCU, which boasts a .314 batting average. The Horned Frogs’ 8.1 runs per game lead the Big 12.

Henley’s junior year got off to a rocky start, but he has pitched well lately. Over his last three starts against LSU, Stanford and Texas Tech teams that were ranked second, sixth and 11th at the time, Henley allowed 13 hits and five earned runs. The right-hander registered 20 strikeouts over those starts’ 19 innings.

Henley also issued 10 walks during his previous three outings. Two of those free passes were costly in last week’s 3-0 loss to Texas Tech. Surrendering walks has been an issue for UT’s entire staff this season. The ninth-ranked Longhorns rank last in the Big 12 with the 4.56 walks they are averaging per game.

“I don’t know if it’s anxiety or something like that or they know they’re not supposed to do it and they’re worried about it while they’re doing it so it happens more,” catcher Michael McCann said. “I don’t know. We’ve really got to figure that out and get better at that.”

Henley said he recently talked with former UT star Huston Street about his mentality on the mound. Street, who saved 324 games over 13 seasons in the major leagues, told Henley to just think about getting that first strike. Henley said he’s going to ask Street to “come talk to some of the guys and see if he can just pound that in their heads. All you have to do is every batter, just get that first strike. Like, stay ahead. When we’re ahead, we dominate hitters.”