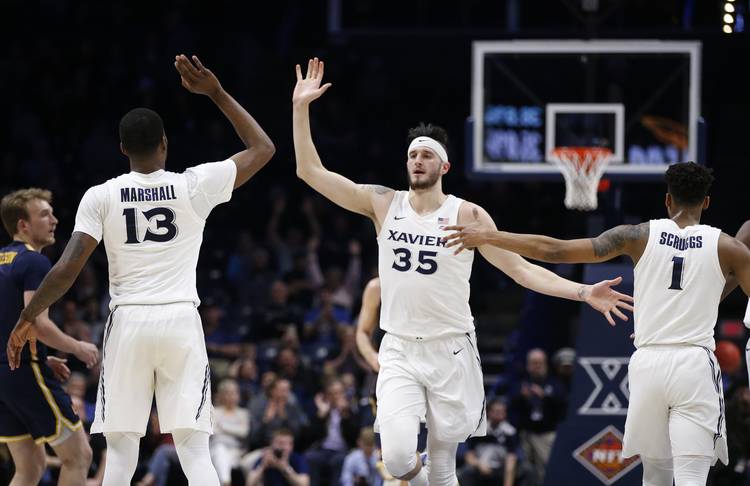 Xavier forward Zach Hankins (35) celebrates a basket wit Naji Marshall (13) and Paul Scruggs (1) during the second half of a first round basketball game against Toledo in the National Invitation Tournament Wednesday, March 20, 2019, in Cincinnati. Xavier won 78-64. (AP Photo/Gary Landers)

Tickets: Tickets are $12 and $14 and can be purchased through the Texas box office. The arena’s upper deck will be closed.

RELATED: The NIT offers Texas’ younger players a chance to gain more confidence for next season

About the Longhorns: According to the NCAA’s NET rankings, Texas had the fifth-toughest schedule in the country this season. The only Big East opponent was Providence, which beat Texas 71-65 on Dec. 21. Senior Dylan Osetkowski has played two of his best games at UT in back-to-back fashion. He had 18 points and seven rebounds against Kansas in the Big 12 tournament. Then, Osetkowski had a career-high 26 points against South Dakota State in the NIT opener. Jase Febres’ entire season is defined by his hot-and-cold shooting. He was 1-for-7 from 3-point range against SDSU. Injured forward Jaxson Hayes (10.0 points 5.0 rebounds) continues to be sidelined after the knee injury suffered in the Big 12 tournament. It’s unclear if he would play again, should Texas win and advance to the quarterfinals or even reach New York for the semifinals.

About the Musketeers: First-year coach Travis Steele’s team was careening during a six-game losing streak that threatened to derail the entire season. A 64-61 overtime win over Creighton on Feb. 13 turned things around. Xavier finished the regular season winning six of the last seven games. It’s only the second time in the last 14 the Musketeers did not make the NCAAs. Naji Marshall had a terrific NIT opener against Toledo. He scored 20 points, grabbed 21 rebounds and had a team-high six rebounds. Xavier used a 25-5 run to blow past Toledo and win 78-64 in front of about 5,700 fans. “Coach preached to us that before any of us got here this program is built on competing in everything we do,” junior Tyrique Jones told the Cincinnati Inquirer. “No matter what tournament it is … we’re gonna compete.”