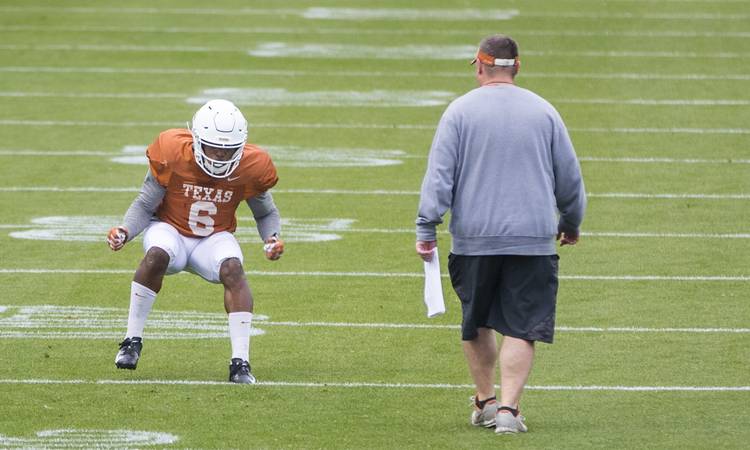 Texas receiver Devin Duvernay (6) run through drills at the Frank Denius practice fields in Austin on March 25, 2019. [RICARDO B. BRAZZIELL/AMERICAN-STATESMAN]

Texas held its fourth practice of the spring on Monday morning, and the media was granted access to around 20 minutes of drills. Here are three observations:

Senior receiver Collin Johnson (knee) also made an appearance at Monday’s practice. Johnson did not run routes and was a limited participant. If Johnson is able to be a full participant this spring, Herman has said it won’t be until “the last week of spring ball.”

2. All five of the scholarship-holding tight ends from UT’s 2018 roster were at Monday’s practice. Thirty-time starter Andrew Beck, though, has graduated and was an onlooker. Redshirt freshman Malcolm Epps and sophomore Rob Cummins, who were both listed as tight ends last year, are no longer playing that position.

3. Former UT defensive back P.J. Locke III was also spotted at Monday’s practice. Both Beck and Locke will participate in UT’s pro day on Wednesday. Neither prospect was invited to the NFL Combine last month, so Wednesday’s workout will be their biggest job interviews.

Beck earned all-conference honors during a senior season in which he recorded 28 of his career’s 40 catches. The versatile Locke started as both a nickel back and safety in 2018. His 77 tackles ranked third among the Longhorns.

Losses to Arkansas and TCU costs Texas its top-10 ranking