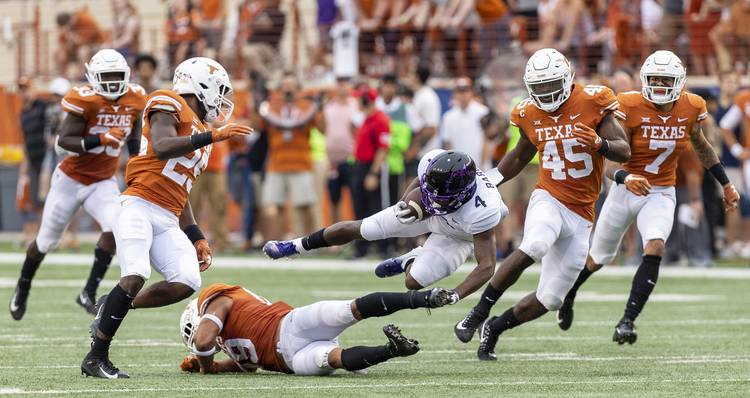 TCU receiver Taye Barber (4) is tripped up by Texas defensive back Brandon Jones (19) as B.J. Foster (25), Anthony Wheeler (45) and Caden Sterns (7) rally to the football at Royal-Memorial Stadium on Sept. 22, 2018. (Stephen Spillman / for American-Statesman)

Already needing to fill some holes in its secondary, Texas added two key returnees to its injury report on Tuesday.

Texas has announced that sophomore B.J. Foster is currently in the concussion protocol for an injury that was sustained on Monday. No timetable was given for Foster’s return. UT also revealed on Tuesday that sophomore Caden Sterns will miss the rest of the team’s spring practices after undergoing a “minor knee procedure.”

Foster and Sterns join senior Brandon Jones among UT’s injured defensive backs. Jones is sitting out the spring after having ankle surgery. Jones and Sterns were the Longhorns’ starting safeties for much of the 2018 season. Foster, who is a candidate to be UT’s nickel back this fall, started six times last year for a secondary that also boasted three senior starters.

Additionally, an ailing hamstring has shelved sophomore cornerback Anthony Cook for part of this spring. He returned to the practice field on Monday.