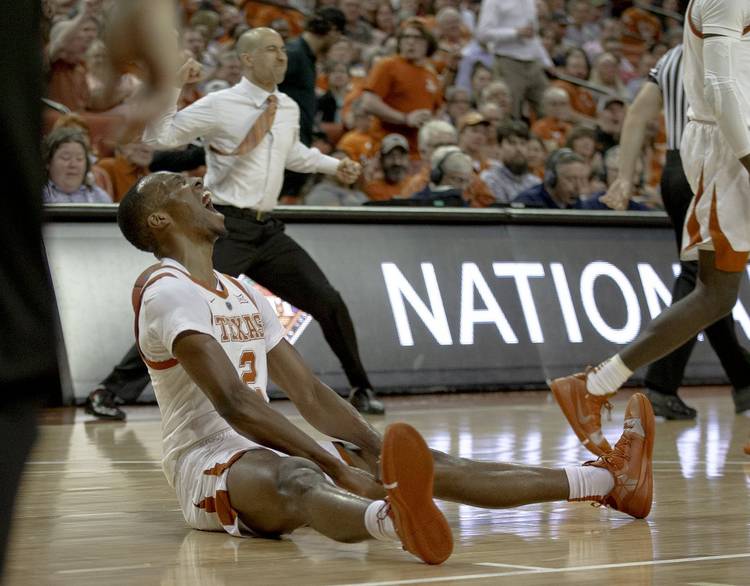 Texas guard Matt Coleman III (2) screams after taking a charge against Colorado during an NCAA college basketball game in the quarterfinals of the NIT on Wednesday, March 27, 2019, in Austin, Texas. [NICK WAGNER/AMERICAN-STATESMAN]

Start spreading this news: the Longhorns are headed to New York.

Forget Hamilton, skip “The MET.” Coach Shaka Smart’s club is headed to Madison Square Garden next week in search of two wins to cap a roller-coaster season on a serious high.

Thanks to a huge first-half outburst, Texas rolled up a 25-point lead and cruised to a 68-55 win over Colorado in the NIT quarterfinals on Wednesday at the Erwin Center.

Senior Dylan Osetkowski had 15 points on 7-of-10 shooting, sophomore Matt Coleman III had 14 points and sophomore Jericho Sims had 10 rebounds. Everybody played a role in the huge win before an announced crowd of 3,982 fans as Frank Sinatra’s famous tune was played on the arena speakers.

Texas hasn’t been in the NIT since 1986, but the school won this tournament in 1978. Now, the Longhorns have a chance to extract some revenge over a Big 12 foe and possibly win a postseason tournament, giving them a huge lift into the offseason.

Texas (19-16) will meet TCU (23-13) in the NIT semifinals on Tuesday at Madison Square Garden. Wichita State (22-14) will meet the winner of the Lipscomb-North Carolina State matchup in the other semifinal.

The NIT championship game is scheduled for Thursday, April 4.

Of all those wearing burnt orange, the best player this postseason has been Osetkowski. Who knows if these are the last competitive games of his basketball career, but he’s sure playing like they are. He had 18 points against Kansas in the Big 12 tournament and then 26 in the NIT opener against South Dakota State. He cooled off with only five points against Xavier but had 13 in the first half against Colorado. Osetkowski’s 3-pointer from the left corner to give Texas a 37-15 lead in the first half was a straight heat-check.

It was a two-point game with 11:42 left before halftime. Then, Kerwin Roach II hit a long jumper. After two misses, Osetkowski shook off his defender and scored on a nifty reverse layup. Courtney Ramey followed with a 3-pointer, and suddenly the Horns put the hammer down. Freshman Gerald Liddell hit his first 3-pointer of the season, followed by a Roach 3-pointer and then a Coleman trey from the left corner. Texas went on a sizzling 23-2 run and had a 25-point lead by halftime, it’s second-biggest lead of the season.

That must’ve been some halftime pep talk. Texas wilted when the second half began, starting the period 0-for-6 shooting and fouling practically everyone in sight. The Horns committed five fouls before the first media timeout with 16:22 left in the game. Smart looked at his bench and pointed at one, two, three, four, five players and sent in wholesale substitutions. Eli Mitrou-Long finally got a runner to fall with 14:54 remaining and ended UT’s 0-for-6 start. Still, the Horns led 46-23.

Coaches love to talk about how resilient college athletes are, and for the most part, they are correct. But Colorado came into Wednesday night having played 35 games this season while traipsing all around the Pac-12. The Buffs played Monday night to win a second-round matchup and then traveled to Austin. NBA teams can handle that kind of rigorous schedule. College teams not so much.

Typically, postseason tournaments are a chance to play teams you haven’t seen all year. Not this time. Texas will go all the way to New York and face TCU, the same team that beat UT twice during the regular season in Big 12 play. TCU won 65-61 in Fort Worth and on Jan. 23 and 69-59 on March 9 in Austin. Longhorns get beat a third time, their season is over.