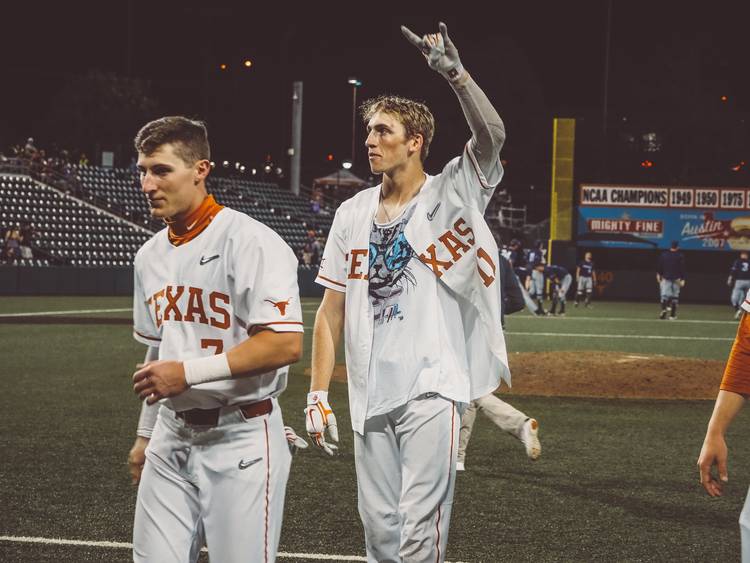 Texas outfielder Duke Ellis (center) celebrates a 6-5 win over Xavier with teammate Masen Hibbeler at UFCU Disch-Falk Field on March 29, 2019. The win was UT's fifth walk-off win since the start of the 2018 season. (Photo courtesy of Texas Athletics)

Among the nation’s leader in walks, junior outfielder Duke Ellis led Texas to a walk-off win at UFCU Disch-Falk Field on Friday night.

With the bases loaded in the 12th inning, Ellis hit a ground-rule double that brought home two runs and secured a 6-5 victory. Xavier has scored twice in the 12th inning’s top half, but five Longhorns reached base during UT’s last stand. Texas also got a RBI single from freshman catcher Caston Peter in the inning.

After the game, Ellis revealed that he was wearing a unique undershirt that belong to Texas third baseman Ryan Reynolds. Before the game, Reynolds had offered up his undershirt to any teammate that wanted it. Is that undershirt, which features a cat wearing sunglasses, a good luck charm now? Said Ellis: “I’m going to wear it every game now. Unless it doesn’t work.”

At this point, Texas may consider Ellis its good luck charm. Texas has recorded five walk-off wins since Ellis transferred from Panola College ahead of the 2018 season. Ellis has been involved in each of those dramatic finishes.

Texas 5, Louisiana 3 (Feb. 17, 2018): Trailing 3-2 in UT’s second game of the season, Ellis led off the ninth inning with an infield single. Ellis soon tied the game by scoring on a single by Masen Hibbeler. Two batters later, Austin Todd homered to end the game.

Texas 11, Texas State 10 (May 1, 2018): UT shortstop David Hamilton hit a ninth-inning grand slam to rally the Longhorns past his hometown team. Thanks to a walk and an error, Ellis was on third base when Hamilton went deep.

Texas 5, TCU 3 (May 18, 2018): With Texas chasing a conference championship, Kody Clemens hit a two-run homer at UFCU Disch-Falk Field to beat TCU. Clemens’ heroics were set up by Ellis, who extended the ninth inning with a two-out infield single. The following day, Texas closed out the regular season with a title-clinching win over the Horned Frogs.

Texas 7, LSU 6 (March 3, 2019): To complete a sweep of a LSU team that was ranked second nationally, Texas scored three times in the ninth inning and got a walk-off single from Todd. Todd’s one-out hit scored Ellis, who had driven in a run on an infield single. Ellis also avoided a potential double play at second base.

Texas 6, Xavier 5 (March 29, 2019):  Facing a fellow left-hander in Trevor Olson, Ellis said he wanted to either hit the ball up the middle or away. A 1-2 offering with the bases loaded gave him a chance to do that latter. The game-winning hit came two inning after Ellis tied the game in the 10th frame with a RBI single.