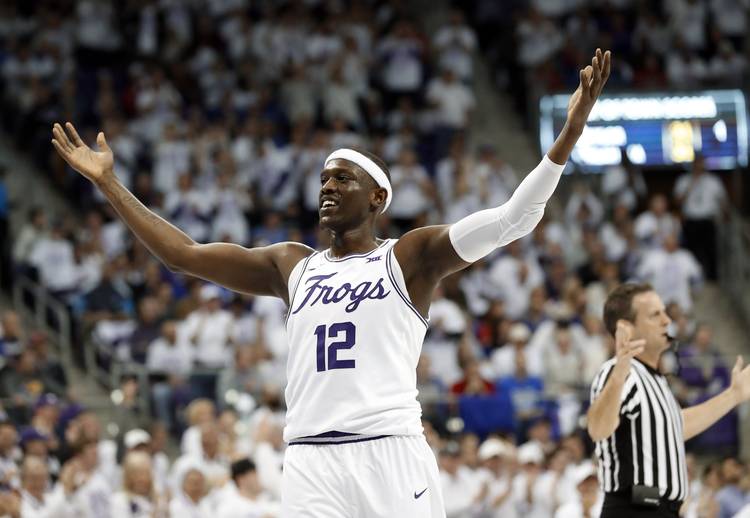 TCU forward Kouat Noi (12) celebrates sinking a three-point basket against Kansas in the first half of an NCAA college basketball game in Fort Worth, Texas, Monday, Feb. 11, 2019. (AP Photo/Tony Gutierrez)

About the series: Texas has 108-66 lead in the all-time series that dates back to 1915. Former UT coach Rick Barnes dominated TCU during his time. Current TCU coach Jamie Dixon is 5-1 over Texas over the last three seasons.

Jan. 23, 2019: TCU 65, Texas 61 (Fort Worth): The Frogs had a plus-seven edge on the offensive glass and 18 second-chance points in a close win. UT guard Eli Mitrou-Long’s off-balance 3-point attempt in the closing seconds hit the top of the backboard.

March 9, 2019: TCU 69, Texas 56 (Austin): In one of the most embarrassing losses of the year, the Longhorns were outdone in almost every aspect. Desmond Bane had 34 points and drilled six 3-pointers. “What happened was we didn’t play anywhere near as well as we can play,” UT coach Shaka Smart said Monday. “That was March 9. We play April 2. We’re focused on trying to win that.”

About the Longhorns: Smart’s club ran hot and cold from 3-point range all season. But the Horns have been decidedly hot in the NIT. Texas has hit 42 3-pointers and shot 42.2 percent from long range in the last three games. Osetkowski, a senior from San Diego, is making his final games count. He’s averaging 16 points in the last four games while shooting 53.5 percent overall. Roach, a senior from Houston, is averaging 15.7 points in the NIT and playing like he was before a five-game suspension. In three straight wins, Texas has gotten tremendous scoring off the bench (72 points). This team isn’t sloppy; UT averages just 10.9 turnovers per game. Texas hasn’t won four in a row since starting the season 5-0.

About the Horned Frogs: TCU won the NIT in 2017 in Dixon’s first season. The former Pittsburgh coach (13 seasons at Pittsburgh) has a 28-15 all-time record at the Garden. The Frogs have made a school-record 277 3-pointers this season but also have the Big 12’s second-best perimeter defense. Opposing teams have made only 30.4 percent from downtown. Bane, Robinson and Miller have all joined the career 1,000-point club. Assistant coach Scott Cross, who was 225-161 in 12 seasons at UT-Arlington, will finish out the season with TCU and then leave for his new job as the head coach at Troy. Another assistant, Corey Barker, was fired by the school this season for his role in the FBI recruiting scandal.

Ranking raises set up a marquee midweek meeting between No. 9 Texas A&M and No. 12 Texas