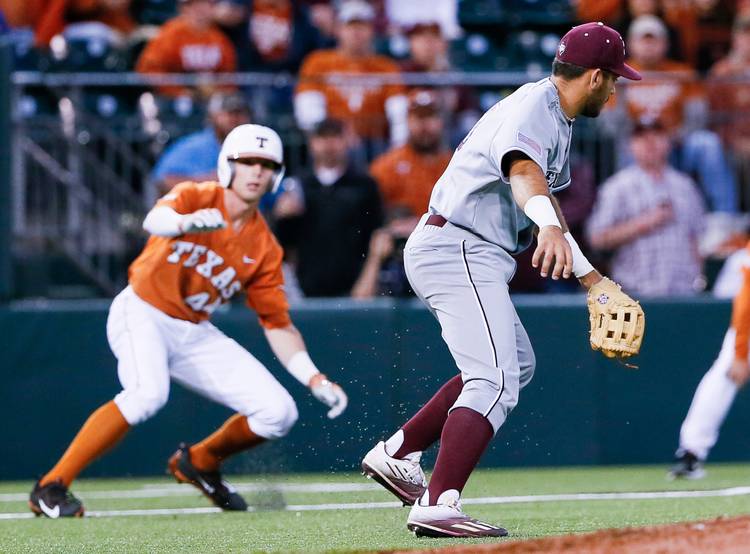 Following a sweep of Xavier, Texas moved from No. 13 to No. 12 in the D1Baseball poll on Monday.

Texas opened this past week with a surprising loss to Incarnate Word in San Antonio. The Longhorns then recorded three 6-5 wins over Xavier. Two of those victories were walk-off wins.

UT (20-11) will travel to Baylor (20-7) for a three-game series this weekend. Up first this week for the Longhorns, though, is Tuesday’s duel with Texas A&M at UFCU Disch-Falk Field.

Texas A&M is 23-6-1 this season. Like the Longhorns, the ninth-ranked Aggies moved up one spot in the D1Baseball poll on Monday.

Texas holds a 244-126-6 lead in its all-time series with Texas A&M. Last year, the teams split the two games they played against each other. Texas A&M earned a 6-5 win in College Station, but UT avenged that loss in the NCAA regional it hosted in Austin.

“It’s never just another game when A&M and Texas play,” Texas coach David Pierce said on Sunday. “I think Rob (Childress, the Texas A&M coach) and I both still have to understand how we utilize our pitching, how we go about it. We’re not going to throw our No. 1s at each other because we both have conference, but at the same time, we’re both going to compete. Both teams want to win this game for pride. I think you approach it that way, but you approach it within what you need to do for a Tuesday game to also prepare for your weekend series.”