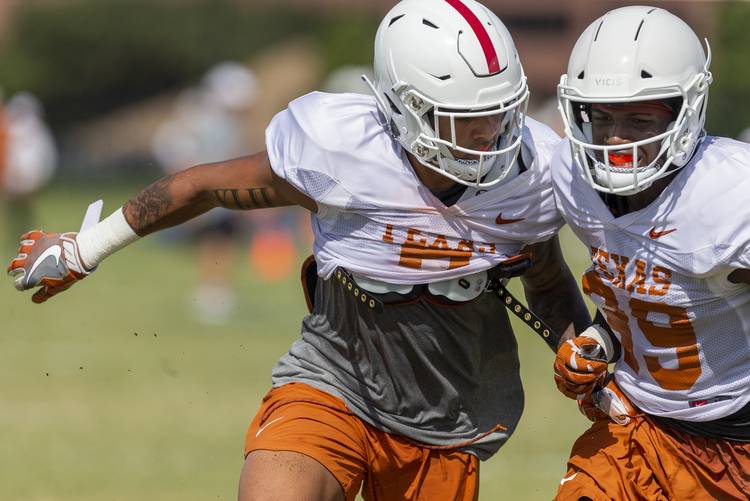 Texas held its ninth practice of the spring on Wednesday morning, and the media was granted access to around 20 minutes of drills. Here are three observations:

1. Texas has already announced that Brandon Jones (ankle) and Caden Sterns (knee) won’t play in next week’s spring game. Due to a lung issue, Chris Brown’s availability is also a question mark. Those three players accounted for 24 of the 28 starts given to UT’s two safeties last season, and two of other remaining starts graduated alongside P.J. Locke III.

B.J. Foster (concussion) was a non-contact participant in Tuesday’s practice and he worked out in front of the media on Wednesday. Foster is projected to be a nickel back during his upcoming sophomore season, but he practiced as a safety during one defensive drill. DeMarvion Overshown is another candidate to earn playing time as a safety.

Texas fans should also keep an eye on Montrell Estell, who received first-team reps on Wednesday. Estell redshirted in 2017 and was mainly used on special teams this past season. The 6-1, 205-pound Estell was a four-star member of Tom Herman’s first recruiting class at Texas.

2. On Wednesday, Texas had its running backs work on running routes out of the slot. For this drill, the running backs were joined by UT’s quarterbacks, slot receivers Joshua Moore and Jordan Pouncey and receivers coach Corby Meekins.

Last season, running backs at Texas caught 53 footballs. Those receptions resulted in 322 yards and five touchdowns. Leading the backfield receivers was Keaontay Ingram, who had 27 receptions and two five-catch games.

Johnson has battled the injury bug since the 2015 season. Due to knee and hamstring injuries, Johnson played only once during UT’s 2016 and 2017 campaigns. Johnson contributed on special teams during the 2018 season, but he hasn’t carried the football since a 2015 game against Texas Tech.

Johnson has still earned both highlights and adulation this spring. On Saturday, a long run by Johnson was among the plays praised by Herman in a post-scrimmage press conference. Three days later, teammates sang his praises.

“He’s probably one of the most hardest-working guys (I’ve ever) met in my life,” Ingram said. “I’ve got so much respect for that dude. For him to be having that type of obstacles in his life and he bouncing back from them, that just shows you what type of guy Kirk is off the field. Kirk has come a very long way.”

Added linebacker Jeffrey McCulloch: “My heart was just so warm when I got the chance to watch Kirk run. I know he loves this game with all his heart. That’s why he’s not giving up. Just the fact that he’s having so much success now really, really makes me and my teammates happy for him because we know what he’s been through.”