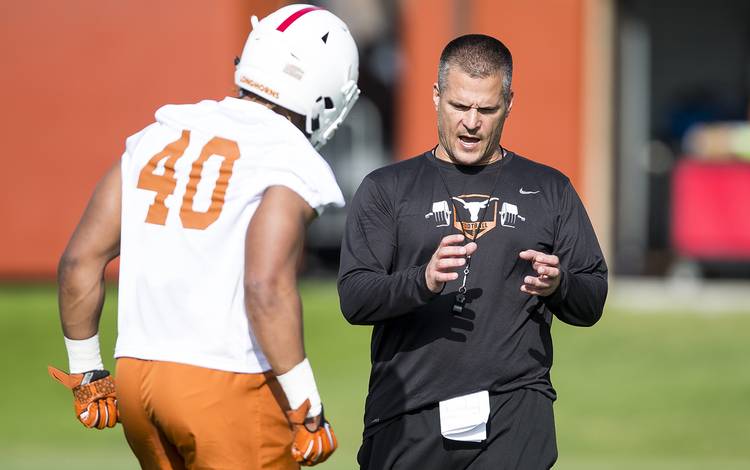 By now, Texas fans are well-aware that the Longhorns’ defense will look different at this weekend’s spring game.

DBU, after all, had three senior starters last year and returnees Brandon Jones (ankle) and Caden Sterns (knee) won’t play on Saturday. Texas also graduated 41 of the 43 starts that were tallied on the defensive line. The three defensive players who served as captains in 2018? Gone, gone and gone.

The same story can be told among the Texas linebackers. Gary Johnson and Anthony Wheeler were UT’s two leading tacklers in 2018, but they are currently trying to catch the attention of NFL scouts. Johnson and Wheeler combined for 177 tackles and 25 starts last season.

Advertisement
For a defense that starts three linebackers, however, the cupboard isn’t bare. Rising senior Jeffrey McCulloch was a six-time starter last season who made the biggest play in UT’s 24-17 win at Kansas. Joseph Ossai capped his freshman year with a team-high eight tackles in the Sugar Bowl.

Earlier this month, Tom Herman said he didn’t expect to have a starter solidified at the middle (aka “Mac”) linebacker position until the team’s fall camp. Redshirt freshman Ayodele Adeoye has been a front-runner to replace Wheeler, but Texas defensive coordinator Todd Orlando said on Tuesday that the former four-star recruit is a “a work in progress.” Junior Caleb Johnson has also come on strong this spring.

When asked what he needs to see from his inexperienced linebackers, Orlando replied consistency. Orlando said some of his linebackers have fared well in team drills but that did not always translate into non-controlled situations. “Can they take scrimmage reps and do it the way that they do in practice,” asked Orlando.

“A lot of these younger guys just have to learn how to play in games by themselves without any coaching and see if they can retain meeting-room stuff and individual (instructions) to go along with drill work and then can do it on their own,” Orlando said. “That’s the beauty of this place. Coach Herman will put us in (many) ‘Play Ball’ situations. That’s what we need more than anything else.”

Johnson and defensive lineman Jacoby Jones both transferred to Texas after spending the past two seasons at junior colleges. Orlando analyzed that Johnson and Jones are “both very athletic. Jacoby’s one of those guys, he’s a natural pass-rush guy. Caleb can run.” Orlando also noted that both players are still learning how things work at Texas. He’ll reserve judgement on the newcomers until after a summer that includes addition training with strength and conditioning coach Yancy McKnight.