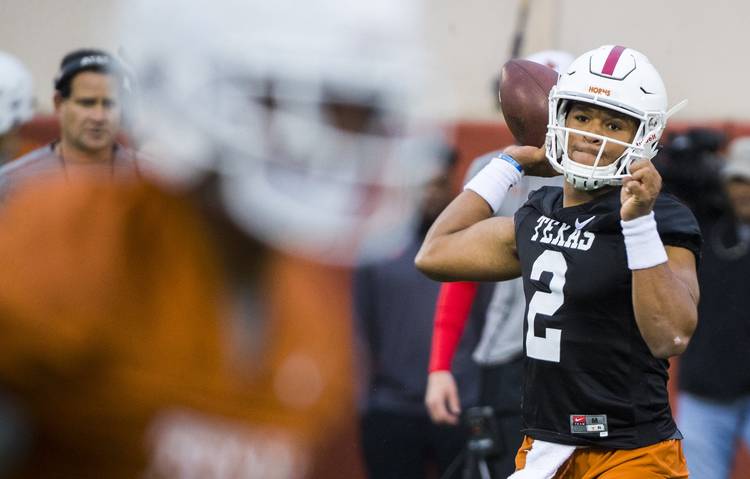 Texas quarterback Roschon Johnson looks to pass during a practice at the Denius Fields in Austin on March 11, 2019. RICARDO B. BRAZZIELL/AMERICAN-STATESMAN]

At the Orange-White Spring Game on Saturday, fans got their first looks at the early enrollees from Texas’ 2019 recruiting class.

Linebacker DeGabriel Floyd did not play because of a neck injury that will sideline him for the entire 2019 season.

Quarterback Roschon Johnson is among the more well-known early enrollees, but he had a quiet evening at Royal-Memorial Stadium. Redshirt freshman Casey Thompson took the majority of the back-up offense’s snaps. Johnson threw only two passes with the White offense, and his one completion to McCoy went for three yards. Johnson also ran three times and was sacked once.

Texas coach Tom Herman said that Johnson still needs to develop and learn the offense. Herman, however, did not seem concerned about the performance of his four-star signee.

Said Herman: “I think Roschon knows that he’s not ready right now. And that’s OK, you’re not supposed to be after 15 practices of college football.”

Texas has had at least one quarterback enroll early during each of Herman’s three springs at Texas. In the Orange-White Spring Game, those four newcomers have combined to go 22-for-51 with 296 passing yards and no touchdowns. Johnson’s three predecessors all played more during their first spring scrimmages. It should be noted, though, that Sam Ehlinger was one of only two scholarship quarterbacks in 2017 and UT used a different format last year during Thompson and Cameron Rising’s debut.