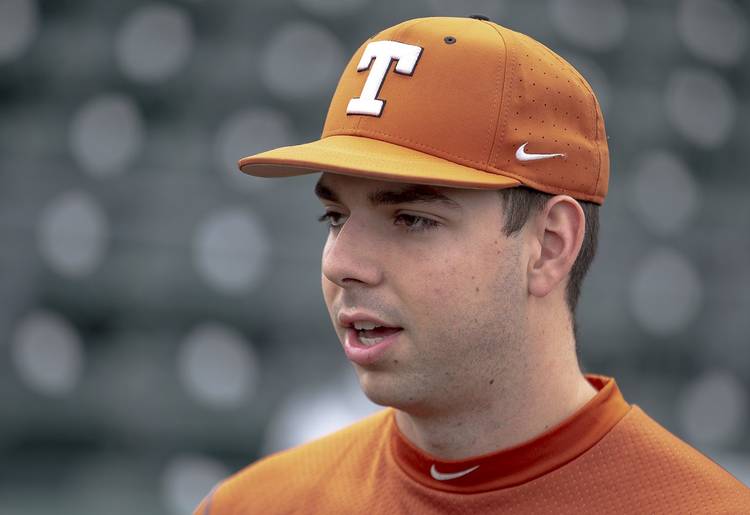 Texas pitcher Matteo Bocchi speaks to media members before the first baseball practice of the season on Jan. 25, 2019 in Austin. [NICK WAGNER/AMERICAN-STATESMAN]

This will be Bocchi’s second start and 11th appearance of the season. The senior right-hander is coming off an effective relief appearance against Rice. Among the Longhorns, only Brandon Ivey’s 0.00 ERA is lower than Bocchi’s 2.29.

Over 10 midweek games this season, no UT pitcher has seen a start extended into the fifth inning. Sophomore Matt Whelan is the only mid-week starter that’s earned a win. Whelan went four innings in a 17-3 rout of Texas Southern that was called after the Tigers’ at-bat in the seventh inning.

During David Pierce’s first season in Austin, Texas had the luxury of starting 2017 draft picks Nick Kennedy, Kyle Johnston and Connor Mayes in 11 of its 14 midweek games. Half of those 14 starts — including Kennedy‘s seven-inning complete game against Texas A&M Corpus-Christi — lasted five innings. In 2018, though, only one of UT’s 14 midweek starts featured an out in the fifth inning.

Last week, freshman Ty Madden worked 3 1/3 innings against the Owls. Over 62 pitches, Madden allowed four hits, one walk and one run. When asked after the game what he wants from his midweek starters, Pierce said the pitchers needed to make the most of their opportunities.

“I want to see performances,” Pierce said. “If they’re a midweek guy and they’re not pitching a lot on the weekends, it’s their game.”

Texas is 23-15 this season. Following two losses to Kansas State this past weekend, the Longhorns have been omitted from the D1Baseball poll for the first time this spring. Lamar is 13-23, but the Cardinals have won three straight games.